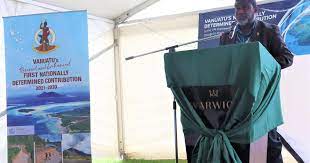 While lives and livelihoods are under threat in the Pacific due to climate change, trillions are being mobilised globally for militarisation, he stressed.

“It is critical that the Pacific scales up sustainable climate finance to build our collective resilience and recovery. Human climate security is what is required, not submarines, warships or army bases in the region,” he said.

“Our Blue Pacific Continent is our collective unique heritage. As large oceanic countries and territories, our landscape is special with its own challenges, climate change being the single threat to our existence.”

Minister Koanapo was speaking during the launching of Vanuatu’s enhanced Nationally Determined Contribution (NDC), which was held as a side event at the Pacific Islands Forum Economic Ministers Meeting (PIFEMM) in Port Vila last week.

Climate change affects the economy and environment of all countries across the region. Vanuatu is still trying to fully recovery from the devastation of extreme climate events, which include cyclone Pam in 2015.

Minister Koanapo said the most vulnerable Pacific nations will be calling for the establishment of a Loss and Damage Finance Facility for the region, at the upcoming COP27 in Egypt.

“Lack of loss and damage finance compounds the economic crisis, but equally important it exacerbates the human rights crisis,” he said.

“The global climate finance goals under the Paris Agreement have not been met. Developed nations must fulfill their USD100 billion annual promise. We need to see increased attention and allocation to Small Island developing states.

The 51st PIF Meeting held last month in Fiji unanimously endorsed Vanuatu’s initiative to secure an advisory opinion from the International Court of Justice (ICJ) on the legal obligations of states in protecting the human rights of current and future generation from the adverse impact of climate change.

Minister Koanapo said: “Our Pacific solidarity is the essential corner stone in taking this pathway successfully forward. Together we must inject new ambition into climate negotiations and realise climate action.”

An advisory opinion from ICJ, the world’s top court, may inspire states to mobilise the financial resources necessary for all nations of the world, including our small developing nations, said the Deputy Prime Minister (DPM), Ishmael Kalsakau.

“With a legal clarification from ICJ, we expect states to act quickly to meet their existing financial obligations to prevent harm and human rights. And if they don’t, I can tell you that the road of mitigation will be long and costly,” he said.

“What the Finance Ministers of the Pacific have made clear this (last) week is that, the finance to address the climate crisis is insufficient and inaccessible.

“Rich developed nations have failed miserably to mobilize the USD100 billion annually, to address the climate needs of developing countries.

“We do know finance is available when trillions are flowing into militarisation, when trillions are mobilised for COVID-19 and fossil fuel companies are taking in billions on the back of the poorest. The greed is grotesque and immoral.

“We all are out of time. We cannot wait another 30 years for the international climate negotiations to agree by consensus on meaningful and adequate finance. By then, how many communities will have disappeared beneath the waves? How many more livelihoods will be destroyed and lives lost?

“Remember that 1.5 decrees isn’t the goal, it is the bare minimum required outcome of climate action to ensure the survival of our Pacific.”

The NDC launch side event was organised by the Secretariat of the Pacific Regional Environment Programme (SPREP) and Vanuatu Government.

We can’t agree to anything less than the establishment of a...