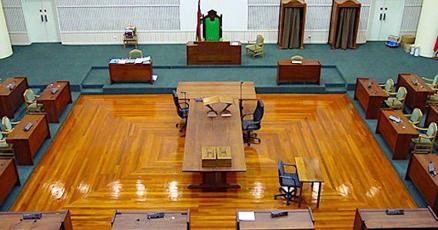 The prime minister of Vanuatu has called for a dissolution of parliament with over a-year-and-four-months still remaining in his four-year-tenure.

Bob Loughman, who was elected in April 2020, is due to face a motion of no confidence in his leadership on Tuesday 16 August with the opposition group led by, Ralph Regenvanu, claiming to have the support of 29 MPs in the 52 seat parliament.

Speaking in Bislama during aVBTC press conference on Monday afternoon Mr Loughman confirmed that after a decision by his council of ministers he had met with the president of Vanuatu, Nikenike Vurobaravu, on Sunday and requested his consideration for a dissolution of parliament in light of the political instability.

When asked by local journalists whether he knew what issues the MPs who deserted him had against his leadership Loughman said one of the main reasons was his refusal to grant an increase to MPs allowances given the difficult economic circumstances facing the country.

RNZ Pacific has requested a comment from the leader of the opposition, Ralph Regenvanu, who said he would not be making any comment until after the parliament sitting on Tuesday.

However, in response to the prime minister’s request to the head of state for a dissolution of parliament Regenvanu posed the following argument on the opposition’s official Facebook page.

“here is a precedent for this current situation from the early years of our democracy. In August 1991, Parliament had already been summoned to debate a motion of no confidence in Prime Minister Walter Lini. Despite this, Lini’s Council of Ministers requested President Fred Timakata to dissolve Parliament. President Timakata refused to do [so], saying ‘The issue before Parliament is a political issue, and political issues are to be determined by parliament. … I therefore conclude that whilst such a legitimate issue is before Parliament, I should not exercise the power to dissolve Parliament. I therefore decline to accept the advice offered to me by the council of Ministers’,” Ralph Regenvanu posted.

In 2016, the then chair of Vanuatu’s electoral commission, John Taleo, and his office’s ten staff had only a month to organise a snap-election with little funding after the then president, Baldwin Lonsdale, dissolved parliament after 14 MPs were convicted of corruption charges in October 2015.