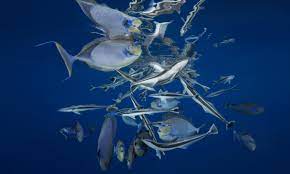 UN member states gather in New York to hammer out a long-awaited treaty that, if agreed, will govern the planet’s last, lawless wilderness: the high seas.

Two hundred nautical miles beyond the territorial waters and jurisdiction of nations, the high seas have been treated “recklessly”, according to environmental groups.

Warning that the outcome of the talks – which run from Monday until 26 August, will determine the fate of the ocean for generations, they are urging world leaders to agree to an ambitious, legally binding treaty to protect marine life and to reverse biodiversity loss.

“The high seas epitomise the tragedy of the commons,” said Marco Lambertini director general of WWF International. “Because they don’t belong to anyone, they have been treated recklessly with impunity. We need a common governance mechanism for our oceans to ensure that nobody’s waters become everyone’s waters – and everyone’s responsibility.”

The high seas, which lie beyond the exclusive economic zones (EEZ) of nations and make up two-thirds of the ocean, play a vital role in supporting fisheries, providing habitats for ecosystems crucial for planetary health and mitigating the impact of the climate crisis. But only 1% of the high seas are protected.

“Here in west Africa, we’ve already seen fish stocks severely depleted by industrial fishing vessels, often from Europe, and this is already harming livelihoods and food security across the region,” said Traoré. “Any further delays would be a slap in the face to all who put faith in political leaders keeping their promises. Delegates must follow through on their governments’ commitments, and finalise an ambitious global ocean treaty now.”

Fifty nations have pledged to protect 30% of the planet’s land and seas by 2030. But without an agreement, these pledges will have no legal basis in the high seas.

This month’s talks are the second attempt this year to reach an agreement on the high seas.

At a UN ocean conference in June, UN secretary-general, António Guterres, declared an “ocean emergency” and suggested the “egoism” of some governments was hampering efforts to agree a high seas treaty. At the same conference in Lisbon, Rena Lee, president of the intergovernmental conference on BBNJ (biodiversity beyond national jurisdiction), who will chair the New York treaty talks, told delegates: “Instruct your negotiators to come to the fifth session with maximum flexibility to get to the finish line.”

The ocean has a critical role in buffering the world from the climate crisis, by absorbing carbon dioxide as well as 90% of heat caused by warming. But sea levels, ocean heating, acidification and greenhouse gas concentrations all reached record levels last year, according to the World Meteorological Organisation’s state of the global climate report, hampering the ocean’s capacity as a carbon sink.

On Friday, the High Seas Alliance, a coalition of 50 environmental organisations will launch a “treaty tracker” to name and shame countries they say are dragging their heels during negotiations.

The alliance will grade each country’s negotiating positions, with a “high” “low” or “business as usual” level of ambition. Hundreds of thousands of people have signed petitions urging all 193 nations to deliver a strong treaty that will protect the ocean.

At least 49 countries, including the UK and the 27 countries of the EU, have committed to achieve an ambitious outcome at the talks.

“Time is running out,” said Sophia Tsenikli, the senior strategic adviser for the High Seas Alliance. “We want a really strong treaty that will allow the ocean to recover from cumulative threats.”

Among the key stumbling blocks to getting an agreement is how the treaty, which will set up a new international body, will interact with other organisations. When the negotiations were first established by the UN general assembly it was made clear that the treaty should not undermine existing organisations.

Liz Karan, project director of the high seas conservation programme at the Pew Charitable Trusts and an observer at the talks, wants to see the new body given powers to establish and monitor marine protected areas and have a role in deciding whether an environmental impact assessment for planned high seas activities is complete enough, prior to the activity taking place.

Karan said she was hopeful, given the high-level coalition and positive statements from world leaders in Lisbon, that the political will exists to drive things forward.

“We need an agreement completed, but one that results in effective conservation in the high seas,” she said.