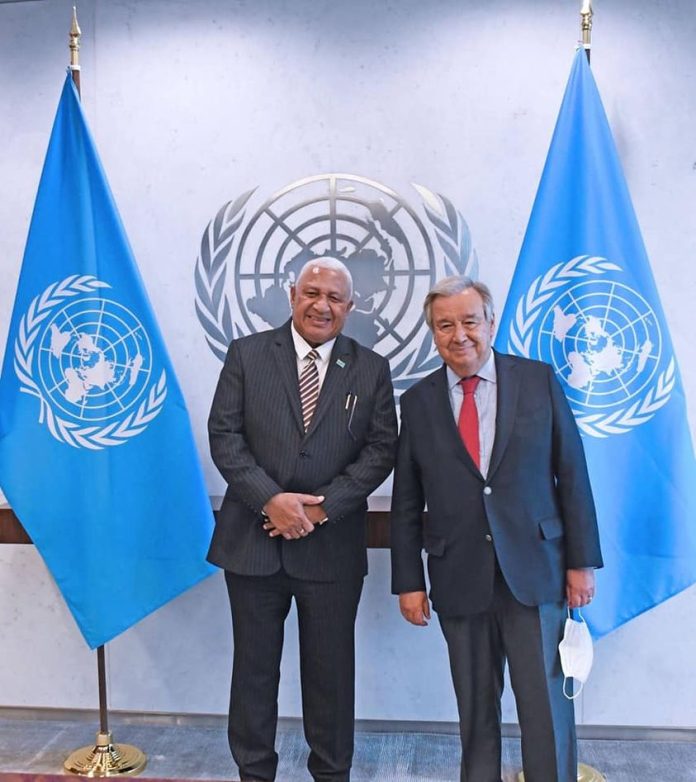 Fijian Prime Minister Frank Bainimarama has met with the United Nations Secretary-General, António Guterres where they discussed the need for greater urgency by the world’s leaders in tackling climate change, and accelerating COVID- 19 recovery efforts amongst other important global issues.

At the meeting, Prime Minister Bainimarama thanked Secretary-General Guterres for his efforts to broker the export of wheat and grain from Ukraine and Russia.

Prime Minister Bainimarama informed the Secretary-General that even the furthest villages in Fiji and across the Pacific felt the impact of the war through increased food and fuel prices.

The Prime Minister also updated the Secretary-General on our peacekeeping operations, adding Fiji is grateful to the UN for its continued assistance and support in this area.

He assured Guterres that Fiji will continue to work with the UN and its partners to further enhance peacekeeping operations.

Discussions at the meeting also focused on UN’s engagements in Fiji and the Pacific.

He particularly thanked the UN leadership and staff based in Fiji for the great work they have been doing in co-ordinating UN response and engagement with Fiji and the region.

Additionally, the Prime Minister conveyed Fiji’s sincere appreciation to the UN for its investment of US$50 million to our blue economy ambition, saying the support has been crucial in helping us to push our sustainable blue economy programes – from expanding coral reef protection, to improving waste management and supporting mangrove forest regeneration.

He said countries had a lot to learn from the innovative work being carried out by some UN agencies in Fiji.

At the meeting, the Head of the Fijian Government thanked the UN Chief for his support towards the Pacific Islands Forum Leaders Meeting.

Both Leaders agreed to work more closely together in trying to secure greater progress in mobilising climate finance and increasing support for adaption and loss and damage.

In response, the Guterres thanked Prime Minister Bainimarama for his sterling leadership of the PIF and his international activism on behalf of small island states.

Meanwhile, the Director-General of the World Health Organisation (WHO), Tedros Adhanom Ghebreyesus, congratulated and thanked Fijian Prime Minister Voreqe Bainimarama for his “compassionate leadership” through these difficult times.

This comes after the Prime Minister tweeted, “I’m proud to share that the 2022-2023 National Budget has been passed in Parliament. Pandemic shortages and an ongoing war are driving prices up globally. Fijians needed a compassionate and responsible game plan to buffer the impact and that’s exactly what my government delivered, said Bainimarama.