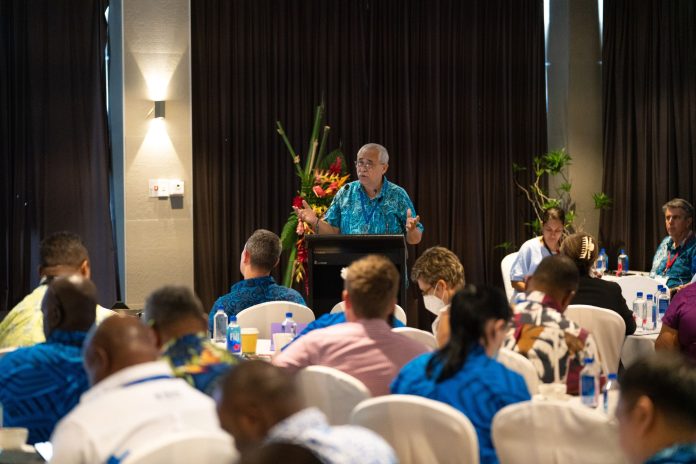 The Pacific Regional Law Enforcement Conference (PRLEC) this week discuss the implications of drug trafficking in the region, community-based approaches to addressing crime, and illegal activity in the maritime domain.

In the context of illicit drugs, the Pacific is caught between crime syndicates, and the Australian and New Zealand drug markets.

Experts outlined that there have been significant increases in the amounts of cocaine seized in Pacific Island region.

Another driver of criminality in the region discussed was the ongoing forced return of detainees from Australia New Zealand and the U.S to Pacific Islands countries. This exacerbates crime with participants calling on a need for reviews.

In the context of responding to criminal threats more generally, the delegates and speakers discussed the need to ensure that the region bring in the key power structures of each Pacific country and community. At a community level these power structures include the Chiefly system, the Church, NGOs, and young people.

These voices are critical in determining the shape and implementation of any response to transnational crime, in its multiple forms, and support of people who have been affected by the implications of drug trafficking.

The discussion turned to the kinds of preventive responses that should be employed,including:understanding and addressing the root causes; taking a whole of society collaborative approach; civic education-consciousness; and empowerment of the vulnerable.

In relation to crime in the maritime domain, the question was asked whether the Pacific Fusion Centre could be an effective solution for information sharing and collaboration.

Further, it was outlined that a barrier to building a network to defeat a network is that different agencies see transnational crime differently. It is very important for all the agencies including law enforcement, immigrations, and customs to harmonise, share information and effectively address the issue together.

“The Pacific “drug highway” has spilled over into domestic markets for illicit drug consumption and production in the Pacific Islands region and drug trafficking has evolved significantly with the rise of local actors in transnational criminal networks.”

“The Pacific and its partners have responded to the challenges of transnational crime by strengthening regional policing architecture and governance through enhanced law enforcement mechanisms, but challenges remain as the illicit drug trade adapts and takes root in the region.”

“Drug harm reduction strategies should be contextually and culturally appropriate, and grounded in a human security approach that draws from law enforcement, government, civil society and traditional power structures. It needs to prioritise youth across the Pacific, as the frontline against drug addiction,” he said.

University of Canterbury, Professor Steven Ratuva said: “The moral impact of transnational crime and how it undermines peoples identify. For example, the women who have been trafficked – they can be shut out by their communities, and they can lose faith in who they are.”

“New forms of transnational crime has got bigger than we think. But there is hope, for example the PIF is seeking an opinion from the International Criminal Court on climate crime and how it can be prosecuted by countries in the Pacific”

“What can we do in the Pacific in response? Address the drivers including education and poverty reduction, it has to be a whole of society approach, it can’t just be a law enforcement approach. You have to empower vulnerable groups,” he said.

James Movick, Director, Pacific Fusion Centre said: “In the past three years, the issues of maritime security, has received a great deal of attention from external partners presented as capability building, for PICs they raise concerns of issues of national sovereignty, integrity. There is also wariness that these external systems could tangle PICs in broader external security dynamics. How do we ensure appropriate PI ownership in domain awareness? – by setting the engagement from the outset.”

China’s co-operation with Pacific ‘no threat’ to Australia: envoy