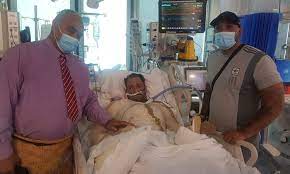 A Pacific farmworker who left his fruit picking job to work for a labour hire company ended up in hospital, without access to Medicare, after he was allegedly set alight by another worker.

Sione Lavalu spent 74 days in the Royal Brisbane hospital with stage three burns earlier this year. When he was first admitted, almost half his body was affected, and doctors told his family he had a 20% chance of surviving.

Lavalu spent four years flying in and out of Australia to pick fruit on farms until early 2020, when Covid hit and he could not get home to Tonga.

Late in 2021, Lavalu went to work for a labour hire construction company in Brisbane, which put him in a house with other Pacific Islander workers, his family said.

They allege for the six months he worked there, he lived in a cramped house with other workers and the company did not offer any health insurance.

On 30 January 2022, it is alleged a fight broke out between the men at the house.

Lavalu – who has since had to relearn how to sit up by himself and eat – told his family he remembers going to bed after the fight and waking up as he was allegedly doused in methylated spirits and set alight.

Lavalu was put in the shower and an ambulance was called.

Queensland police charged a 26-year-old with acts intended to cause grievous bodily harm in relation to the incident.

“It will be alleged that on 30 January … a 32-year-old man suffered significant burns as a result of an accelerant which was allegedly poured on the man and deliberately lit,” a police spokesperson said.

When Lavalu left his job at the farm he lost access to Medicare – despite the fact he had worked in Australia for six years by then. Four weeks after a seasonal worker disengages from the Pacific Australia Labour Mobility (Palm) scheme, they lose their access to health insurance.

There are about 22,830 people from the Pacific Islands in Australia under the Palm program. It allows Australian businesses to hire workers on a special visa designed to fill labour shortages in regional Australia.

Lavalu’s family says he lost all his teeth due to an infection that was spreading to his brain – and it is unclear if he will be able to work again.

His family, which includes his Sydney-based brother Manase, has been struggling to get help. They set up a GoFundMe to try to raise the $79,000(US$55,166) he now owes in medical bills but after receiving just over $400(US$279) it was cancelled.

Lavalu was previously supporting his wife and five children back home. His case highlights how vulnerable Pacific Islander fruit pickers can be.

In the past financial year, 1,181 workers on the Palm programme were reported to have absconded, with 706 of those completely “disengaging”, according to the employment and foreign affairs departments.

Comparatively, 225 were reported to have absconded the year before that, and five years ago it was just 117.

The reasons for absconding are twofold – workers are sometimes poached by employers on the promise of better pay and conditions, or they flee their workplaces due to exploitation. When workers request to transfer farms it can take months to find a new placement.

Stories of low pay, poor conditions and unsatisfactory housing plague the program. Across the Pacific, it is often likened to blackbirding.

“When he finished fruit picking, coronavirus hit, so then he started working in Brisbane in a construction company,” Sarah*, one of Lavalu’s relatives in Sydney who acted as an interpreter, said.

The company denied the house where the fight allegedly occurred was used as accommodation – but another former worker told Guardian Australia that Tongans often stayed there.

The labour hire company was not registered to hire workers on visas or offer accommodation, Queensland’s Office of Industrial Relations told Guardian Australia.

“For the licensee in question, the register does not currently include any information about supply of workers on visas or the provision of accommodation,” a spokesperson said.

On its website, the company states it offers qualified and certified construction workers for jobs across Queensland.

“We’ll take care of all the administration involved in managing wages, tax payments, superannuation and workers’ compensation so you can focus on project management,” it states.

The company, which the Guardian has chosen not to name, said it had offered legal employment to Lavalu and had not housed him.

“All employees are paid wages and entitlements under appropriate awards. All tax and superannuation is paid as per mandated guidelines. Additionally, all workers are covered under appropriate workers compensation policies.

“All workers are all qualified to undertake various labouring tasks. [We] do not poach workers. Furthermore, we do not have any information as to why the individual had left his usual dwellings and workplace obligations.”

But Sarah said the company knew the workers didn’t have health insurance.

“If you’re running a company and responsible for a whole group of men who are foreign to this country, you should be following the rules – Sione nearly died,” she said.

“People need to know this isn’t new. It’s very common and because these guys are desperate to make money to send home to support their families they do it, knowing it’s wrong.”

“There’s a lot of regret. He says ‘I should have gone home’ but it’s sad – he has a family to feed and support.”

A spokesperson for Dfat, which now runs the Palm scheme, would not comment on individual cases. They said usually an employer paid for health insurance for four weeks after a worker absconded but then they were on their own.

“If a worker on a long term placement disengages from the Palm scheme, their employer must not cease payments for health insurance for a maximum period of 28 days or until the worker’s visa has been cancelled by the Department of Home Affairs,” the spokesperson said.

“The department is seeking to align these settings as part of the new, consolidated Palm scheme.”