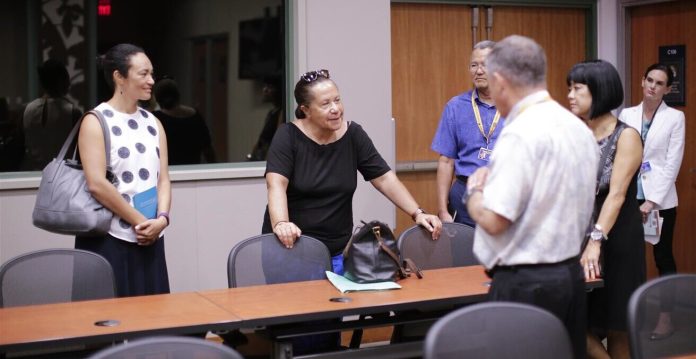 The Pacific Islands Forum is torn between competing influences. This will have consequences for the Forum’s cohesion.

Just a few years ago, Oceania’s premiere regional organisation, the Pacific Islands Forum (hereafter “the Forum”) appeared to be going from strength to strength. Under the leadership of Secretary-General, Dame Meg Taylor, in office from 2014-2021, the Forum had gained much in terms of coordinated policy planning across a range of concerns from security, trade, and governance, to ocean management, and sustainable development.

Major policies encapsulated in a new “Blue Pacific” narrative were formally endorsed by the Forum in 2017 and signalled a fresh determination on the part of island members to take collective ownership of their regional agenda. The major event for the July 2022 meeting in Suva was to launch the 2050 strategy for the “Blue Pacific Continent.”

Regional unity is clearly vital to this and other key strategies, but other factors have been playing havoc.

Internal tensions among island members have strained the Forum’s cohesion. The most recent upset was the withdrawal from Forum membership of Kiribati – a move unprecedented in the organisation’s half-century history. This followed developments in February 2021 when all five Micronesian members gave notice of their intention to withdraw following the failure of the Forum at large to appoint their nominee to replace Dame Meg as secretary-general.

According to the Micronesian members, it was their “turn” to have a Micronesian hold this prestigious post. There was no “Pacific Way” consensus on a new appointee and the Micronesian candidate was defeated in a close vote by Cook Islander Henry Puna. Despite there now being agreement to rotate the secretary-general’s position among the three major subregions of Melanesia, Micronesia, and Polynesia in future, the dust has hardly settled on the matter, as the withdrawal of Kiribati suggests.

The division of Oceania’s islands into the Melanesia, Micronesia, and Polynesia groupings emerged from European naming practices in the eighteenth century, consolidating over time. Since independence, political leaders have taken on identities aligned with these groupings, making them their own. The subregions have their own organisations – the Melanesian Spearhead Group (MSG), the Polynesian Leaders’ Group(PLG), and the Micronesian Presidents’ Summit (MPS). And although these are in many ways complementary to the Forum, they also provide a basis for internecine tensions.

Some see geopolitical factors at work in recent troubles, with China pulling strings behind the scenes in Kiribati’s withdrawal from the Forum, although China denies this. But it has certainly been active in attempts to secure trade and security deals across the region. Chinese influence was clearly evident in the switch of diplomatic recognition from Taiwan by Kiribati and Solomon Islands in 2019. This was followed in March 2022 by a China-Solomon Islands security pact. Although oriented to assisting with internal security in a country which has experienced major domestic disorder, it clearly opens the door to a much more significant Chinese presence.

Despite the superficially jovial atmosphere at the Suva leader’s meeting, the first in-person meeting since 2019 due to COVID-19, difficulties for the organisation are on-going. Apart from the fallout over the secretary-general’s position, China is crafting its own bilateral strategies in the islands even as it engages, at least superficially, with multilateral organisations such as the Forum. In terms of identity politics, it also seeks to assert its profile as a South-South development partner in contrast with the West/non-West bifurcation.

The contrast with the Forum’s situation in the period leading up to the fallout with Micronesian members is notable. In 2016, it welcomed New Caledonia and French Polynesia to the fold, bringing its membership to 18. Although not independent, the French territories are largely self-governing. Their inclusion came after several decades of slowly improved relations, especially since France ended nuclear testing in French Polynesia in 1996. Although resentment of French colonialism remains a factor in regional politics, all existing Forum members were unanimous in accepting the French territories, a move seen to add to the organisation’s status and capacity.

In 2014, Fiji’s membership was reinstated after its suspension in 2009, following a military coup led by Fiji’s current prime minister, Frank Bainimarama, who hosted the Forum’s 51st summit in Suva in July.

Fiji’s relations with Australia, New Zealand, and several other island countries, especially in the Polynesian subregion, had been severely strained in the aftermath of the 2006 coup. These relations deteriorated further following Fiji’s suspension from the Forum, which Bainimarama blamed on Australian and New Zealand influence.

Bainimarama’s isolation from the Forum prompted a “look North” policy – or rather, “look anywhere but Australia and New Zealand” – aimed at broadening Fiji’s diplomatic options and engaging with “non-traditional partners.” Other Pacific Island countries have also been looking further afield.

The main divisions within the Forum have often appeared to be between Australia and New Zealand on the one hand, and the island countries on the other. The fact that Australia and New Zealand are both former colonial powers has certainly produced some ambiguities in their Forum membership. And in recent years, Australia’s conservative governments have failed to take seriously islander concerns about climate change.

To date, Pacific Island countries have been oriented primarily to Western powers because of, rather than in spite of, their colonial history. US ties are obviously strong in the Micronesian sub-region. The end of the Cold War, however, saw diminishing attention to the region, which was partially reversed under the Obama administration’s “re-orientation” to the Asia-Pacific in 2011. The later promotion of a “free and open Indo-Pacific” strategic framework, by the US and regional partners, was a direct response to the challenges presented by China and concern for the current rules-based international order.
Australia and New Zealand both announced policies of “stepping up” or “resetting” relations with their Pacific Island neighbours in 2018. The term “Pacific family” is now frequently invoked – a welcome change from when conservative Australian leaders referred to the island region as their “backyard.”

Aid from Western donors remains the most significant source of assistance. Links with traditional Western partners, especially the US, Australia, and New Zealand, are further reinforced by the fact that considerable migration to these countries has taken place. In addition to strengthening personal ties, remittances now contribute a major income stream for island communities.

Chinese aid, much of it in the form of soft loans, has also been increasing, drawing accusations of setting debt traps for island countries. Even so, island countries have, for the most part, benefitted from Chinese projects aimed at infrastructure development. The longer-term impact of indebtedness has yet to play out but there is no doubt that China has been able to buy increasing political influence.

Despite recent adverse developments, the Forum is scarcely about to disintegrate. Although all details and concerns are yet to be resolved, a settlement with the Micronesian members is in sight and it is likely that all will eventually be retained within the fold. Subregional rivalries may well continue, but it is patently obvious that multilateral cohesion is in the interests of island countries, many of which face a threat to their very existence as the consequences of climate change, and the politics surrounding it, play out over the next few decades.

Island members also face the challenge of balancing China’s strategic interests in the region with those of its long-term traditional partners. The Forum has so far played it safe as far as this issue is concerned, but China’s ambitions and the way in which it pursues bilateral strategies, may well test the Forum’s diverse membership’s capacity to maintain a neutral stance in the unfolding geopolitical scenario.