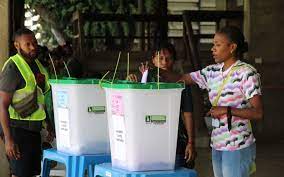 “We come to a stage where if do not fix the electoral system, and there is groundswell of thinking and voices raised from all over the community nationwide, the next election in 2027 would be worse,” he said.

“It will be worse and there will be chaos everywhere because I don’t think the PNG Defence Force, police and other security forces would be able to control and contain the kind of violence that can erupt.”

He said there was fraud in the current Government administrative systems in the provision of initiatives for people to become MPs.

“Not only initiatives with millions of kina for the parliamentarians to access, but there are also the communities where their livelihoods are dependent on the electoral process,” he said.

Institute of National Affairs executive director Paul Barker pointed out that cheating and abuse of rules were common during national elections.

Barker said it had resulted in some individuals voting multiple times, moving on to another polling station or even constituency to cast votes for their clansman or presumably for some reward.

O’Neill had said the outcomes did not represent the wishes of the people.

He urged Police Commissioner David Manning and Electoral Commissioner Simon Sinai to be independent in discharging their duties.

“Our democracy is under threat and leaders who are elected properly, according to the wish of the people, need to stand strong to protect our country and people,” O’Neill said.

“Having elections in Hela before the rest of the country, where the conduct of the General Election (2022) has been chaotic.

“Election fraud in that province has set the standard and pace of which other provinces are now starting to adapt.

Prime Minister James Marape in a statement over the weekend said Pangu Party “is not rigging the elections as claimed by disgruntled candidates and supporters”.

He added that if Pangu had rigged the elections, it would have made a clean-sweep of all 118 seats.