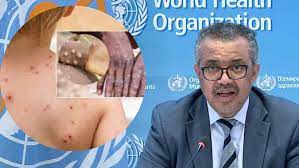 Monkeypox is an outbreak that has spread around the world rapidly, through new modes of transmission about which we understand ‘too little’, and which meets the criteria of an emergency under International Health Regulations.

“For all of these reasons, I have decided that the global monkeypox outbreak represents a public health emergency of international concern”, the World Health Organisation’s Director, Tedros Adhanom Gebreyesus, announced on Saturday.

Tedros indicated that the current risk of Monkeypox is moderate globally and in all regions, except in the European region where the risk is high.

“There is also a clear risk of further international spread, although the risk of interference with international traffic remains low for the moment”, he added.

Currently, there are more than 16,000 reported cases from 75 countries and territories and five deaths.

WHO’s chief said that although he was declaring a public health emergency of international concern, for the moment the Monkeypox outbreak is concentrated among men who have sex with men, especially those with multiple sexual partners.

“That means that this is an outbreak that can be stopped with the right strategies in the right groups”, he explained.

Tedros said that it is essential that all countries work closely with communities of men who have sex with men, to design and deliver effective information and services, and to adopt measures that protect the health, human rights and dignity of affected communities.

“With the tools we have right now, we can stop transmission and bring this outbreak under control”, he highlighted.

Tedros clarified that the Emergency Committee under the International Health Regulations, convened last Thursday, could not reach a consensus about Monkeypox.

He explained that WHO has to consider five elements to decide whether an outbreak constitutes a public health emergency of international concern.

1.Information provided by countries – which in this case shows that the virus has spread rapidly to many countries that have not seen it before;

3.The advice of the Emergency Committee, which did not reach a consensus;

4.Scientific principles, evidence and other relevant information – which according to Tedros are currently insufficient and leave them with many unknowns;

Commitee member’s in support of declaring the emergency expressed that future waves of Monkeypox cases are expected as the virus will be introduced in additional susceptible populations, and that the current magnitude of the outbreak might be underestimated.

They also cited the “moral duty” to deploy all means and tools available to respond to the outbreak, as highlighted by leaders of the LGBTI+ communities from several countries, bearing in mind that the community currently most affected outside Africa is the same initially reported to be affected in the early stages of HIV/AIDS pandemic.

The experts underscored that the modes of transmission sustaining the current outbreak are still not fully understood.

In order to fight the Monkeypox outbreak WHO recommends countries to:

*Implement a coordinated response to stop transmission and protect vulnerable groups
*Engage and protect affected communities
*Intensify surveillance and public health measures
* Strengthen clinical management and infection prevention and control in hospitals and clinics
*Accelerate research into the use of vaccines, therapeutics and other tools

A full set of recommendations adapted to different country contexts is published on WHO’s website, and the agency has also launched a live data dashboard for the monkeypox outbreak.