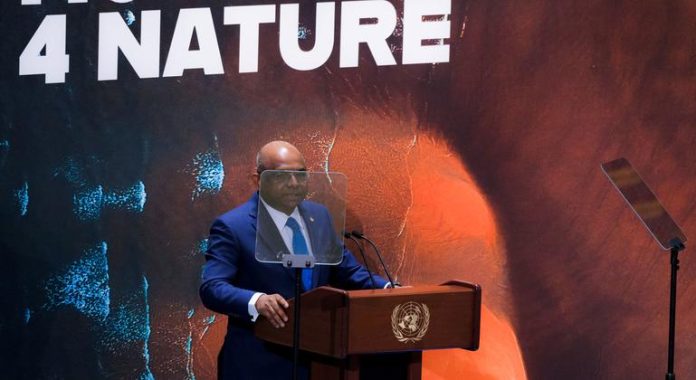 With less than eight years remaining to limit global warming to 1.5 degrees Celsius, the President of the UN General Assembly convened a ‘Moment for Nature’ debate on Tuesday to examine the interconnected environmental threats hampering efforts to achieve sustainable development.

The day-long event is being held to assess recent decisions on the global environment agenda and to present solutions to common bottlenecks, such as the gaps between commitments and actions, as well as the need for wider mobilisation.

“We know that we have backed ourselves into a corner with our recklessness. We know that this will only get worse, and quickly, as we continue to delay the actions that are needed,” said Shahid.

Despite the immense challenges facing the world, he was adamant that humanity can effect change, as witnessed by the development of technologies that were once inconceivable.

UN Secretary-General António Guterres welcomed the meeting, where participants are reviewing information from major UN conferences issues such as climate, desertification and biodiversity; the state of the oceans, and sustainable transportation, food systems, and energy.

It comes as countries are facing what he called a “triple crisis” of climate disruption, biodiversity loss and pollution.

“Our ways of life – based on producing, consuming, discarding and polluting – have brought us to this dire state of affairs,” the UN chief said in video message.

“But, since human activities are at the root of this planetary emergency, that means we also hold the key to the solutions. Now is the time to transform our relationship with nature and chart a new path.”

The UN Deputy Secretary-General, Amina Mohammed, outlined areas where governments can take action, including in transforming how we view and value nature.

“We must strengthen nature’s capacity to protect us from hazards and extreme events. This means accelerating implementation of national restoration policies, programmes and plans for marine and terrestrial ecosystems while creating new jobs, tackling poverty and improving sustainable development,” she said.

The President of the UN’s Economic and Social Council (ECOSOC), Collen V. Kelapile, underscored the urgency to act on the “mounting scientific evidence” on climate change. The world is at the brink of a precipice, he warned.

“We should either do everything we can to change our consumption and production patterns and make transformative change to nature-sensitive economic growth, nature-based solutions to rebuild our societies after COVID and preserve our environment,” he said.

“Or we can get further deeper into the abyss of continuous calamities, until we destroy the entire humankind.”

The review under discussion at the meeting was conducted by the UN Environment Programme (UNEP), whose chief, Inger Anderson, catalogued the numerous outcomes from global gatherings over the past year, such as the COP27 climate conference in Glasgow, and the fifth UN Environment Assembly held in Nairobi.

“But we have not yet reached that moment for nature – the moment when we truly find common ground for nature and deliver on the many commitments and pledges that have been made,” she said in a video message.

This December, countries will gather in Montréal to conclude the Global Biodiversity Framework, a new set of goals for nature over the next decade.  Andersen said it must result in “a massive political lift for nature”, as well as adequate resource mobilisation.

She also urged countries to adopt a General Assembly resolution on the universal human right to a clean, healthy and sustainable environment.

“What Member States are deliberating on is the very foundation of human life because the environment sustains humanity and indeed the other rights we enjoy,” she said.