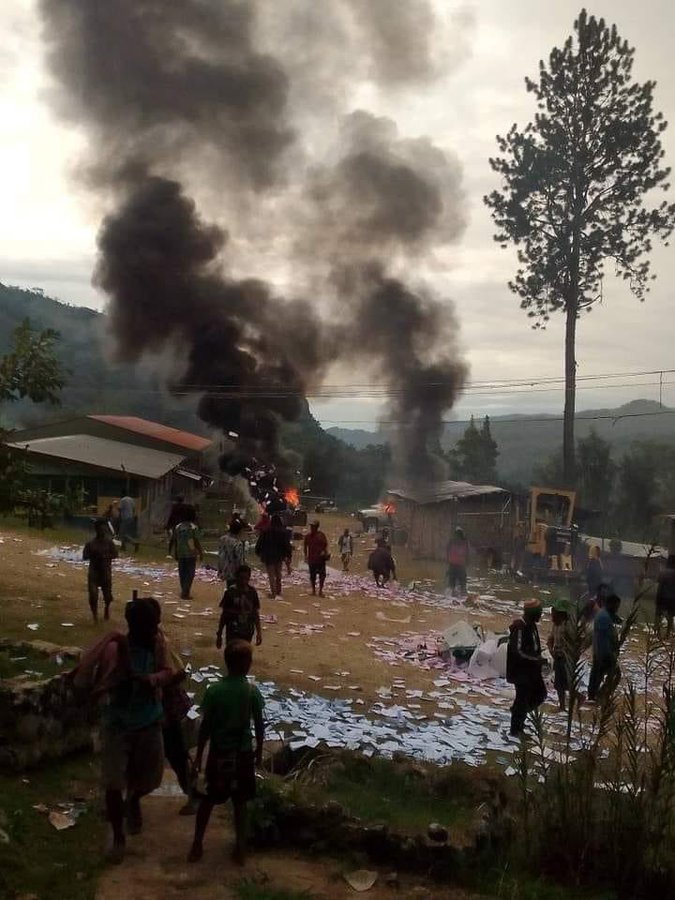 Papua New Guinea Police Commissioner David Manning has fired the first warning shot in the hunt for candidates who were involved in disrupting the national elections in Enga.

He is deploying a multi police and army taskforce to hunt down 15 suspected candidates and bring them to justice in violence torn Enga.

He said Enga police have identified 15 candidates who are alleged to have instigated criminal acts that have affected the National General Election.

“This will allow for search warrants to be applied for on their persons, known associates, financial assets, and material property and if need be arrest warrants,” Police Commissioner David Manning said.

“We are not time bound by the elections. If these candidates think that we are, then they are sadly misinformed.

“We plan to have this Taskforce deployed in stages over the coming days.

“In the last 72 hours there has seen an upsurge in the rate of lawlessness in parts of Enga.

“The situation is very serious and I have grave concerns for the lives of many innocent people there who have become victims of barbaric and animalistic attacks,” he said.

Manning has been up in the restive Highlands of PNG since day one of polling.

“I have always maintained that the electoral process must be jointly delivered in partnership with the people, unfortunately certain candidates do not think the is the way the elections should be delivered.

“To think that these candidates are considered to be highly educated and have successful careers, married and have children of their own, for them to condone such violent acts by their tribesman and supporters is sickening.

“These so called elites of the province despite their degrees are nothing but highly educated people with questionable morals.

“We have a saying in many parts of the country with different versions depending where you are ‘mango diwai save karim mango, kapiak diwai save karim kapiak”, a law abiding upstanding citizen would not allow criminals to act on his/her behalf to better their chances of winning elections, similarly a citizen who resorts and supports illegal means of getting what he/she wants will never solicit the support of law abiding citizens to carry out their criminal activities.

“I have conveyed my concerns to the Prime Minister as well as the Commander of the PNGDF, and we have resolved to establish a separate multi force Taskforce to enforce the rule of law in Enga immediately and also secure the Porgera mine.

“The situation in Enga is no ordinary law and order situation, while many of the violent incidents are attributed to the elections there are sectors of the local communities in Enga that continue to engage in violent criminal activities pre-dating the elections and will continue throughout the election period.

“It will be the Joint Taskforce’s primary objective to enforce the Rule of Law and respond appropriately where necessary to these individuals and/or groups.”

“Candidates who have employed the services of these criminals or have supported these activities will be apprehended and face the criminal justice system.”

Reports of violence in the last 72 hours include:

– Destruction of four bridges on the Wabag -Kompiam road.

– Destruction of culverts and the digging of a three-meter wide and six meter deep trench on the Sirunki section of the Wabag – Porgera Road.

– Sporadic attacks on government security forces throughout the polling period.

– Access by road to Porgera via Wabag continues to be cut off.

– Destruction of schools and teachers homes.

– Destruction of shops and various other buildings in and around Paiam Station.

– Manning said that so far boxes have been airlifted from Enga.

– Despite efforts of the joint security task force, only a limited number of boxes were able to be located from Kompiam and extracted to Hagen.

– All other boxes for the electorate that were extracted by road are currently being stored at the main storage containers in Wabag.

– The Kompiam returning officer and his officials were on hand and were involved in assisting the extraction of the boxes from Kompiam and delivered to Hagen.

– All other remaining boxes not extracted will be left to the Returning Officer and Electoral Manager to decide as to what options to take.

– All boxes that were in Maramuni were safely extracted and are securely stored in Hagen after the use of Wampenamanda airport was discontinued.

– Issues relating to the threat and risk assessment of counting has been assessed and recommendations for the counting of votes of specific electorates from Enga has been relayed to the Enga PESC and the PNGEC Commissioner. The key recommendation is to count these electorates outside of Enga Province.

– PPC Enga had led a team by road through Southern Highlands to Porgera to extract the polled Ballot Boxes. The Ballot Boxes for Paiela were unpolled and were also retrieved and brought back to Wabag.

– Certain boxes were unable to be inserted into designated polling areas during the polling period due to rival candidates clashing in those areas.

– The Returning Officer and the PEM will make representation to the PNGEC as to what can be done.

– All remaining polled ballot boxes were retrieved and have been securely stored in Wabag.

Minister Payne arrives in Palau to advance an open, resilient and...