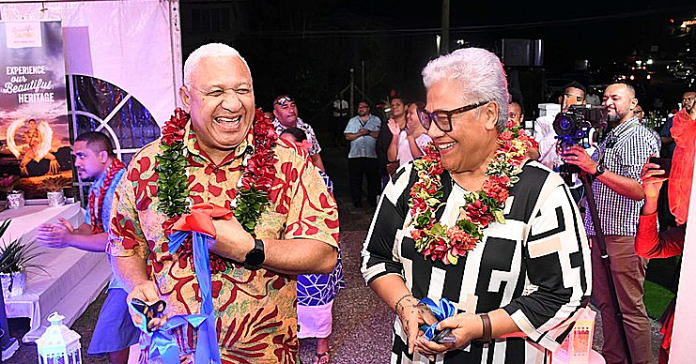 The shocking exit of Kiribati from the Pacific Islands Forum’s membership was “not an ideal situation”, Samoan Prime Minister, Fiame Naomi Mata’afa has said.

In an interview with the Samoa Observer in Fiji, after the news broke that Kiribati had pulled the plug on its membership, the Samoan Prime Minister said when she was in Fiji last month for another meeting they had concerns about the Micronesian member state.

She said in retrospect it now appears that their concerns at that time were valid and the island nation’s departure is now a significant issue that the Pacific family needed to immediately address.

On Saturday the Kiribati President, Taneti Maamau wrote to the PIF Secretary General, Henry Puna to advise him of the decision by his government to withdraw from the forum with immediate effect.

“I would also like to take this opportunity to offer my deepest regrets if the position that Kiribati has taken with regards to the Suva agreement and our decision not to participate in the upcoming Leaders meeting have offended you, the Cook Islands and our Pacific family,” Maamau wrote in his letter dated 9 July 2022.

“It was never meant to undermine your leadership of the Pacific’s premier institution, nor is it directed at any member of the Pacific community.”

Fiame told this newspaper that Forum leaders haven’t received a copy of the Kiribati President’s letter, though she had no doubt the correspondence will be made available during the meeting.

Looking back at the meeting in Suva last month, the Prime Minister said six PIF nations signed the ‘Suva Agreement, though she indicated that the Samoan delegation did call for more attention to be given to Kiribati in the lead-up to this week’s PIF Meetings.

She then emphasised that bringing back the northern Pacific state should be a top priority as having the unity of the region is paramount.

“[Its] not an ideal situation and I think earlier on here for the Suva meeting last month there was concern that Kiribati wasn’t engaging, hadn’t been engaging for a while,” Mata’afa said. “When we had the foreign affairs meeting we actually raised it, it might be something that we need to pay attention to, either through Ministers of Foreign Affairs which was a preparatory meeting for the leaders or for the leaders for themselves to give some attention leading up to this meeting, we tabled that last week.

“With this announcement I think our concerns were valid.”

In his two-page letter to the PIF Secretary General, the Kiribati President wrote that while they welcome the effort in preparing the reform packages, “Kiribati is gravely concerned by the decision to forego the opportunity to genuinely discuss the appointment and tenure of the incumbent SG [Secretary General] without Kiribati’s involvement”.

President Maamau added in his letter that the invitation, which was sent prior to the recent meeting in Suva, the “proposal to voluntarily step down from the SG position as part of the reform package was no longer on the table for discussion”.

Given the news from Kiribati, Mata’afa said it is a significant issue for the Forum leaders to discuss in the lead up of the official launch of the 2050 Strategy for the Blue Pacific Continent.

Prime Minister Mata’afa alongside the leaders from Fiji, Cook Islands the Federated State of Micronesian (FSM), Marshall Islands and Nauru signed the Suva Agreement last month in order to resolve major reform issues relating to the impasse that led to the withdrawal by the Micronesian Presidents’ Summit.

As a demonstration of leadership and brotherhood, the PIF Chair and Fiji’s Prime Minister offered a reform package for consideration by the Micronesian Presidents’ Summit. At the time of the Suva discussions, the FSM President David Panuelo said Palau, Marshall Islands and Nauru were attempting to get in contact with Kiribati to garner their support for the proposed reforms.

The reform package is for the PIF Secretary General Puna to complete his current three year term to be replaced in 2024 by a new Micronesian Secretary General for a five years term and to rotate the SG and Forum Chair by sub-region.

The six nations that signed the agreement also agreed there are to be two deputy Secretary Generals from other regions. There is agreement to create, and immediately install a Pacific Ocean Commissioner as a role separate and distinct from the duties of the Secretary General. In addition, the office of the Pacific Ocean Commissioner is to be hived off to be headquartered in Micronesia.

Mata’afa said Samoa is a signatory of the Suva Agreement and was supportive of it.

Asked if the agreement is still relevant, given Kiribati’s exit and the absence of Nauru and Marshall Islands leaders at the Forum, Mata’afa maintained the latter had reasons for their absence.

She said the Marshall Islands signed the agreement and a media report on the Marshallese President missing in action, which tied it to the exit of Kiribati from the PIF, is “media mischief”.

“The way we understand it because Nauru [President] is unable to leave, they have COVID-19 now in the community, it’s a small community so I think they are rightly concerned during this time,” she replied.

“Marshall Islands, they have strict quarantine and I think the leadership is tied up with those requirements, but they were signatories to the Suva Agreement, Marshall Islands and Nauru.

“The President of Nauru was the spokesperson for Micronesia in the talks to try and settle the issue with the wider forum…I don’t think those reports are correct.”

Mata’afa has been accompanied to the 51st PIF Leaders Meeting accompanied by the CEO of the Ministry of Foreign Affairs and Trade, Peseta Noumea Simi. The Minister of Agriculture and Fisheries, La’auli Leuatea Schmidt is also in Suva to attend the special Ministerial Meeting alongside his Fisheries Ministerial colleagues and Pacific Leaders.

Several cases of COVID-19 vaccines being made mandatory in the Pacific...