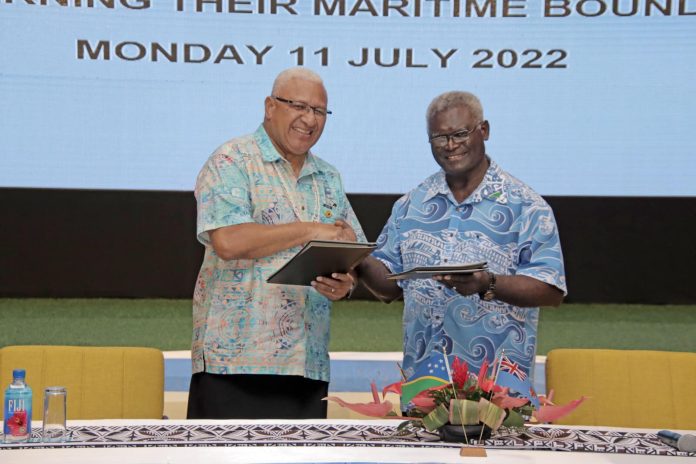 The Agreement was signed at the Blue Pacific High-Level Panel Event on Ocean Leadership at the Grand Pacific Hotel this evening, along the margins of the 51st PIF Leaders Meeting.

“The Agreement establishes our countries’ respective maritime zones in accordance with the principles of the United Nations Convention on the Law of the Sea, and today marks a promising step towards a brighter and bluer future for Fiji and the Solomon Islands,” said Prime Minister Bainimarama.

Ongoing negotiations and bilateral discussions between officials from the two countries, led to this signing with technical support provided by the Pacific Community (SPC) under the Pacific Maritime Boundaries Project and with assistance from Development Partners (the Consortium).

The Agreement sets out the intersecting maritime boundaries of Fiji and the Solomon Islands in accordance with the United Nations Convention on the Law of the Sea (UNCLOS) which both countries are a party to.
As Large Ocean States, the finalization of this Agreement will ensure that both Pacific Island countries’ maritime boundaries are clearly defined and that their rights and obligations under UNCLOS are properly established.

Through this Maritime Boundary Agreement, both Leaders have also declared the permanence of their country’s respective maritime zones, irrespective of climate change-related sea-level rise and its potential impact on maritime boundaries. This aligns with the Pacific Island Leaders’ Declaration on Preserving Maritime Zones in the Face of Climate Change-related Sea-Level Rise (‘Declaration’) that was issued in August 2021.

Prime Minister Sogavare said that the Agreement is a celebration of the chapter on oceans in the 2050 Blue Pacific Strategy.

“This is a historic moment which signifies Solomon Islands’ commitment to the UNCLOS and I thank Prime Minister Bainimarama for creating space for this signing,” he added.

The signing of this Agreement highlights the long history of engagement and diplomatic relations that Fiji has had with the Solomon Islands and paves the way for future cooperation.

There are 48 shared or overlapping boundaries between countries in the Pacific Islands region. 35 of these boundaries have been formalised through an Agreement, and there are 13 outstanding bilateral and five high seas boundaries remaining to be declared. The signing of this Agreement, brings the number of outstanding Agreements to 12.