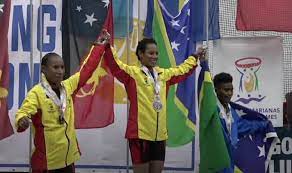 Toua, 38, said she “was shocked — everyone saw my reaction. It’s been more than 20 years since I’ve been doing this and to be inducted — it’s something. You know that you’ve been recognized for something that you’ve done for a long time,” she told Variety in an interview.

Toua, who first competed in the 1999 South Pacific Games which Guam hosted, also won her 13th title overall in the Oceania Weightlifting Championships which coincided with the 2022 Pacific Mini Games.

Asked about competing against much younger athletes, she replied, “They have the advantage because they are young and vibrant, and they have all the energy in the world. But age doesn’t make a difference. I always have positivity.”

She said the Pacific Mini Games will help her prepare for the Commonwealth Games which Birmingham, London will host in July.

In the Pacific Mini Games on Saipan, Toua won gold in snatch, 74kg; clean & jerk, 96kg; and for a total weight of 170kg. She also bagged a gold medal in the Oceania Weightlifting Championships.

Regarding the host island, Toua said: “Saipan is beautiful. These Mini Games have brought up the standard in the Pacific because the accommodation is brilliant. We never had a Pacific Games that provided hotel accommodations as well as transportation. The people are lovely and welcoming — I feel at home. If I was asked where I would rather go, I’d say Saipan, despite the heat,” she added in jest.