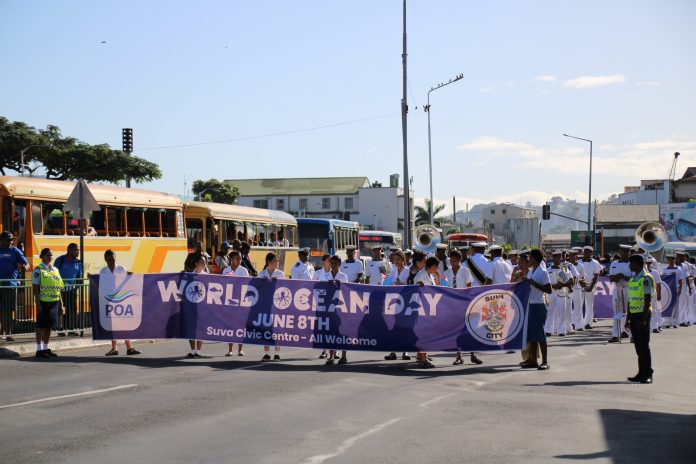 This week, to coincide with the World Ocean Day (WOD) on 08 June,  Pacific’s experts and stakeholders on the Oceans met in Suva to plan coordinated action at the United Nations Oceans Conference starting in Lisbon on 28 June.

Speaking at the event, Fiji’s Fisheries Minister Semi Koroilavesau said that the enormous scale of the challenges facing the oceans today can no longer be ignored. “We are not the only ones that hold the future of our ocean in our hands. The entire world must also do its part and that is the greater challenge that calls us for greater commitment and awareness from us all,” he noted.

The Pacific Ocean spans approximately 41 million square kilometres and for most of the small Pacific Island Countries (PICs) under the Law of the Sea Convention they own larger areas of the sea than landmass. Thus, the ocean is critical to their livelihoods and their identity.

Protecting and nurturing the oceans forms Sustainable Development Goal (SDG) 14—Life Below Water—that calls to conserve and sustainably use the oceans, seas and marine resources. The South Pacific region fought hard to achieve this stand-alone goal on the oceans adopted within the 2030 agenda for SDGs. Thus this week’s two-day gathering—in person and online—organised by the Pacific Ocean Alliance (POA) was designed to build a coordinated campaign at the forthcoming UN Oceans Conference to give more prominence to SDG 14 that has been pushed to the corners as the world tries to rebuilt from the COVID-19 pandemic.

The POA was launched at the 2014 Small Island Developing States (SIDS) meeting in Apia, Samoa. It is a multi-stakeholder grouping of Pacific Island Countries constituting private sector and civil society organisations, academic and research institutions, development partners and international organisations.

In his opening remarks to the meeting, Puna said that the PICs face both threats and opportunities due to the geo-political battle hotting up in the South Pacific—he did not name countries. “These challenges impact on our ability to protect our oceans” he said. “It is only by political commitment that we can capitalise on opportunities and resources the ocean provides”.

The PICs wiil be presenting their 2050 Strategy for the Blue Pacific Continent that will develop a long-term vision for the region and it outline the steps to achieve this vision. It is a regional strategy to protect and secure the Pacific people, place and prospects.

“Our fisheries resources are vital for our people and the world. We provide more than 50 percent of the global supply (and) it is critical to look after this resource for the world” Puna added, pointing out that the Blue Pacific strategy is designed to do that. He added a cautionary note saying that “we need to discuss here the sustainable management of our resources—not based on other’s needs”.

UN Secretary-General’s Special Envoy on the Oceans, Peter Thompson addressing the meeting by video acknowledged that SDG 14 was adopted through the “determined” efforts of the South Pacific, and at this stage “we should not surrender to the forces of greed and exploitation”. He suggested that there should be a concentrated effort to stop pollution of the oceans by plastics and climatic finance need to be targeted at goals like SDG 14. He advocates that the ‘Blue Pacific’ strategy needs to infiltrate all SDGs and the international community “should not squander this year’s opportunity to save the oceans”.

While the 2050 Strategy for Blue Pacific is vital, Thompson believes that this needs resources and both the POA meeting and UN Ocean Conference need to address the issue of resourcing—both in governance and financing – to operationalise the strategy.

Dr Josie Tamate, Director General of the Ministry of National Resouces from Niue told the meeting that addressing the issue of funding is very important to realise the ‘Blue Pacific’ strategy, and she mentioned a US$32 million trust fund that has been established calling out to bilateral donors to contribute. She also added another scheme of Ocean Conservation Credit would be proposed at the PIF leaders’ summit in July, that would involve a 20-year commitment from international contributors.

Addressing the POA meeting through zoom link, Sainivalati Navoti, Chief of the SIDS department at the UN in New York, argued that while health and military conflicts have diverted the world’s attention from SDGs recently, in terms of realising the SDG 14 under the ‘Blue Pacific’ strategy, a serious impediment is a lack of reliable data from the region. When asked by IDN if this is a “cop out by the UN?” he refuted it strongly pointing out that they are working with regional partner to overcome this “data gap”.

Addressing the WOD event indigenous community leader Adi Kolokesa Latianara from Serua Island said “with climate change effects intensifying and causing more coral bleaching, our oceans and its resources have been greatly affected. Life is getting harder as our marine resources are declining, we are catching less fish with sizes also decreasing. There’s more pollution evident, and with expensive fuel prices, we now have to go further out of our fishing grounds to find a good catch”.

Nevertheless, she said they could help to implement the Marine Protection Area within their communities and encourage youth to get involved “by cultivating sea urchings, mollusks and sea cucumber near the shore to promote growth and replenishment of such species”. She also recommends the use of solar powered boats. But to achieve these aims, Latianara emphasised that there needs to be regional (and international) cooperation.

“The main concern is whether our (international) partners are coming (to Lisbon) with open ears to listen for our call to action” Semisi Seruitanoa, membership officer of the International Union for Conservation of Nature told IDN. He pointed out that the Pacific has been asking for quite a while for greater financial resources to be allocated for conserving the oceans. He believes that the Pacific has ample data but the problem is on interpreting these.

“We are the leading region in the world that has almost completed the EEZ (Exclusive Economic Zone) boundaries (and) one of the leading regions with the marine protection areas,” added Seruitanoa. But he pointed out that the capacity to do surveillance of these areas to stop illegal activity is hampered by the lack of financial resources. “China has recently helped in providing surveillance equipment and training of naval officers,” he added.

Speaking to IDN at the end of the World Ocean Day march, young indigenous woman Maima Vaai of Uto Ni Yalo Trust said, “We indigenous people are the custodians that have been given the role to protect and care for our oceans and our land. Not only for us but also for our future generations that are to come, said Vaai.