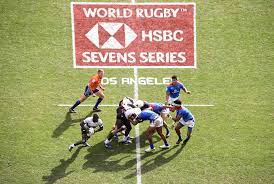 The Sydney Sevens is set to make its long-awaited return as World Rugby announces the Sevens Series for the 2022-23 calendar.

It is slated to be held on 27-29 January as part of the expanded series, the first time it will be played in Australia since 2020.

Australia will enter as the defending women’s World Series champions, whilst the men currently sit in second place with just one leg remaining.

The top four teams for the expanded tournament will qualify for the 2024 Olympics Games.

The men’s Series will include 11 rounds, featuring two events in Hong Kong, set to host the first round on 4-6 November 2022.

The women’s Series involves seven rounds and will kick off in Dubai on 2-3 December 2022 in the first of four consecutive men’s and women’s combined events.

Dubai is followed by Cape Town, South Africa on 9-11 December before all teams will compete in Hamilton, New Zealand (21-22 January) before Sydney.

The men’s Series then lands in Los Angeles, USA on 25-26 February before a combined round in Vancouver, Canada on 3-5 March following the success of the standalone women’s event in 2022.

Both competitions then move on to Hong Kong for the traditional blockbuster event on 31 March – 2 April, followed by a men’s round in Singapore on 8-9 April.

The women’s Series will once again finish in Toulouse, France as part of a combined event on 12-14 May, with the men’s finale coming a week later in London, England on 20-21 May.

“Following a uniquely challenging period for global sport, we are delighted to announce that rugby sevens is back to full force with a full line-up of hosts and teams for the HSBC World Rugby Sevens Series in 2023, which is the biggest to date,” World Rugby Chief Executive Alan Gilpin said in a statement.

“Fans around the world can mark their calendars and look ahead with excitement and certainty to a Series which promises to be highly competitive and intense from the start to finish with Paris 2024 Olympic qualification on offer for the top four women’s and men’s teams in the 2023 Series standings.

“The sense of anticipation from players and fans to return to much-loved venues such as Hong Kong, Hamilton and Sydney is especially high after missing out in recent years due to the effects of the global pandemic, and we are pleased to see Vancouver welcome the women’s tournament as part of a combined event in 2023.”.