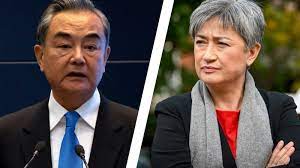 China’s offering of a comprehensive security and economic pact to 10 Pacific nations shows it is confidently moving from a bilateral to a multilateral approach to the Pacific, and one that increasingly links trade with security. It is also an attempt to supplant the existing regional architecture of organisations like the Pacific Islands Forum.

As competing foreign ministers Penny Wong and Wang Yi woo the region, Pacific nations will use the opportunity to increase their leverage, and who can blame them after decades of neglect from their traditional partners. They need basic infrastructure, climate action and renewable energy solutions, and more trade. If Australia, New Zealand and the United States cannot provide it then it becomes difficult to argue Pacific nations should not accept it from China.

The danger for Pacific islands in this delicate dance, however, is that China is not just another trading partner; it requires obedience to China’s internal and external policies, the gradual loss of sovereignty and press freedoms, and potentially the end of their democratic systems.

In 2019, I reported for this paper on how China had used bribes to win over enough MPs in the Solomon Islands to switch diplomatic relations from Taiwan to Beijing. I was in Solomons after being deported from Kiribati with a 60 Minutes crew for trying to report on their diplomatic switch. Before our exit, Kiribati’s founding father Sir Ieremia Tabai, complained to us that he and the opposition leader no longer had access to local media and that “democracy has died here”.

The Solomons faces a similar threat as its prime minister, Manasseh Sogavare, accepts an “iron-clad” agreement with China and seeks to delay elections, while local journalists complain about declining press freedom. China’s ambitions for Solomons, Bougainville and Kiribati were plain to see in 2019 but there was little response from Canberra.

The glaring problem, apparent for some time, is that Australia does not appear to have a strategy. This is as surprising as it is disturbing, and must be remedied quickly. What’s the point of having a generous aid program and good intelligence if there is no guiding strategy? We become forever caught in reactive responses, rather than following a vision articulated and welcomed by the region, moving towards closer integration.

What does Australia want our immediate region to look like now and in 10, 20, 50 years’ time? A Pacific Union of democratic nations with the free flow of goods and people? That way nations like Kiribati know they have regional support for dignified resettlement if need be – that’s the real meaning of being part of a Pacific family. Such a regional grouping involving Australia, New Zealand and up to 20 Pacific island states and territories would also be less likely to see some nations “freelance” with external powers.

The central lesson of World War II is that anyone who wants to mess with Australia comes through New Guinea and Melanesia first. Geography doesn’t change. China has much the same strategy as Japan did in seeking a foothold in the Solomons – to isolate Australia.

Our nation became a federation in 1901 partly as strategic strengthening at a time France and Germany were claiming islands in the south Pacific. Feeling secure in the southwest Pacific from Timor to Fiji – the Melanesian arc – has always been our first-order strategic necessity. Yet the concept seems forgotten. The word “Melanesia” does not appear once in any White Papers.

There is a danger that in our grand narrative sweep of “Indo-Pacific”, we may not see the wood for the trees; that is, the need to zero in on the core region to our immediate north at a time when our strategic choices are now very consequential. In the end, our security, like in World War II, rests not on high-tech weaponry and bases but on the hearts and minds of our Melanesian neighbours partnering with us on shared challenges. It means consulting with the Pacific on major strategic decisions. Pacific leaders remain upset that the QUAD, AUKUS and “Indo-Pacific” concept, which all involve their region, have been done without any meaningful engagement with them.

The Albanese government has made a robust start to resetting relations by committing to climate action and enhancing opportunities for Pacific seasonal labour and migration, one of the best initiatives Australia can offer. But there is much more to be done, especially on trade, education, health infrastructure and supporting a media ecosystem that is two-way; better Australian media coverage while also supporting more Pacific voices and media.

We may need to help sand-bag national broadcasters across the Pacific who are underfunded and being courted by China. We are in an information war but not even on the battlefield, thanks to a Coalition legacy of gutting the ABC to the extent Australia has not had an international broadcast voice for some time. Soft power matters. Without a free press, democracy itself will wither in the Pacific.

On trade, everyday container ships turn up at ports to disgorge Australian products into Pacific markets but leave mostly empty. Pacific nations want the dignity of a trading relationship, not an aid-dependent one, and this is one area China wins considerable influence.

Some of the Pacific Step Up should happen in Australia, including the need for compulsory Pacific studies as part of our school curriculums. Appointing a Special Commissioner to tour farms to ensure Pacific workers are not being exploited would also give confidence to Pacific communities. We need to manufacture Aussie-made green tech and then shower the Pacific with it.

Finally, at a time when everyone is focused on Chinese moves, let’s not forget that the most significant human rights abuse and environmental destruction happening in the Pacific is being done by Indonesia in West Papua. For more than a decade, Pacific leaders have said the two biggest security threats in the region are climate change and West Papua, to which Australian diplomats have responded “but China!” – creating a wider gulf.

Social media across the Pacific is constantly aflame with accusations of Australian complicity in Indonesia’s brutal hold there while pitching West Papua as “the Pacific’s Ukraine”. Silence on West Papua continues to undermine Australia’s Pacific Step Up and the new Labor government needs to work with Indonesia and the United States o create a lasting solution there, as difficult as that may be. This is not just for the sake of West Papuans but for wider Pacific security, as militias and jihadis still operate there and Russia has used Biak island base to conduct sorties by its nuclear TU95 ‘Bear’ bombers near Australian airspace.

As I wrote some years back, Australia is caught in a pincer movement that requires deft diplomacy and a hardening of resolve so we are ready to defend Melanesian interests as our own. Australia is already a Melanesian nation by virtue of our Torres Strait and South Sea Islander communities.

A start will be to host an annual summit with Melanesian leaders and roll out the red carpet. The Pacific is all about relationships, not ideology and Australian ministers must put in more face time around the kava bowl. There is a Fijian saying – “relationships are the fragrance of life”.

Australia needs to better balance its default pro-Jakarta policy with a pro-Melanesia one and see if there is regional interest in moving towards a Pacific Union that solidifies the Pacific family. Then Australia will have remembered that home is among the islands.

Ben Bohane is a Vanuatu-based journalist and policy analyst who has reported on the Pacific for nearly 30 years.