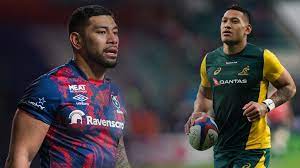 All three players were included in Toutai Kefu’s 31-man ‘Ikale Tahi squad to face Fiji, Samoa and Australia A in the Pacific Nations Cup, which precedes a World Cup playoff match against either Hong Kong, South Korea or Malaysia.

The inclusion of Folau, Piutau and Fekitoa marks the return to international rugby for all three players under World Rugby’s new eligibility laws introduced on 01 January.

Those laws allow test-capped players to represent a second country that they are qualified for via birthright following a three-year stand down from international rugby.

Folau, Piutau and Fekitoa qualify for Tonga under those regulations as all three players have been absent from test rugby for at least four years.

After playing the last of his 73 tests for the Wallabies in November 2018, Folau was sacked by Rugby Australia the following year after he published an Instagram post that said hell awaited “drunks, homosexuals, adulterers” and others.

Since then, the 33-year-old has flitted between rugby union and rugby league, but has found a home for himself at the Shining Arcs Tokyo-Bay Urayasu in Japan Rugby League One this year, scoring 10 tries in 12 matches.

Folau is expected to start in an all-star ‘Ikale Tahi backline alongside Piutau and Fekitoa, both of whom last played for the All Blacks in 2015 and 2017, respectively.

Piutau and Fekitoa players have starred for their respective clubs since departing New Zealand for the riches of Europe, and will provide Tonga with plenty of star power in a squad that also features former two-test All Blacks halfback Augustine Pulu.

Pulu last played for the All Blacks in 2014, and joins Folau, Piutau and Fekitoa as four of 13 players primed to make their ‘Ikale Tahi debuts.

All but one of the other uncapped players named in the Tonga side are from Moana Pasifika, the new Super Rugby Pacific franchise that has provided Kefu with a total of 13 players in his latest squad.

Koloamatangi, a one-test Hong Kong international, and Inisi were both part of the Tonga squad named to face the All Blacks, Samoa and the Cook Islands last July, but never took to the field.

All of those players are joined by former Highlanders and Chiefs prop Siate Tokolahi, now plying his trade in France for Pau, as the uncapped contingent in the ‘Ikale Tahi squad.

Other former internationals, such as ex-All Blacks midfielder George Moala, are also now eligible for Tonga selection but haven’t been included in this squad, while more are expected to become available in the coming months.

That could see former Wallabies duo Sekope Kepu and Adam Coleman, as well as ex-All Blacks pair Vaea Fifita and Atu Moli, added to the ‘Ikale Tahi squad for the November test window.

Tonga will open their Pacific Nations Cup campaign against Fiji in Suva on July 3, which will be followed by matches against Samoa and Australia A in Lautoka on July 10 and July 17, respectively.

The ‘Ikale Tahi will then play their World Cup qualifier against the winner of next month’s Asian Rugby Championship in Australia on July 23.

The winner of that playoff match will join South Africa, Ireland, Scotland and Romania in Pool B at next year’s World Cup in France.

Better to analyse Fijian Drua than play them: Taumoepeau