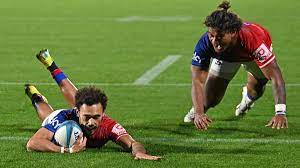 Moana Pasifika have claimed their maiden Australian scalp with a shock 32-22 Super Rugby Pacific win over the Brumbies in Auckland.

The competition newcomers and cellar dwellers overcame the early dismissal of inspirational captain Sekope Kepu to power to just their second win of the season at Mt Smart Stadium.

The deflating defeat, following the Chiefs’ 35-34 win over Fijian Drua earlier on Saturday, also cost the Brumbies fourth spot on the ladder heading into next week’s finals.

The Brumbies will host either the Hurricanes or the NSW Waratahs in a sudden-death quarter-final next Saturday night in Canberra.

Dan McKellar’s side will need to lift their game following three straight losses and easily their worst performance all year.

Elementary errors and ill-discipline cruelled them against an inspired Moana outfit.

The Brumbies had little respect for the ball, made poor decisions, kicked out on the full from open play and then failed to find touch when trying to.

It was sloppy stuff and Moana made them pay, despite Kepu being red-carded in only the ninth minute for a high tackle on Brumbies winger Andy Muirhead.

The Brumbies wasted little cashing in on their one-man advantage with Connal McInerney finishing off a driving maul and Noah Lolesio converting for a 7-0 lead.

But against the odds, Moana crossed twice with a player short, first through fullback William Havili and then Joe Apikotoa powered over from an unstoppable maul.

Worse was to come for the Brumbies, with the visitors reduced to 13 men after McInerney and flanker Jahrome Brown were both yellow carded in the space of two minutes either side of Moana being awarded a penalty try on the stroke of halftime.

Desperate to soak up time and take any points on offer while down on troops, the Brumbies resorted to a drop goal from Lolesio early in the second half to reduce the deficit to 19-10.

The visitors survived the 10 minutes with only 13 players unscathed but a 51st-minute penalty to Leali’ifano restored Moana’s 12-point buffer.

The Brumbies turned the screws at the set piece to claim another try from their deadly driving maul, this time to replacement hooker Lachie Lonergan.

But despite camping on Moana’s line, the Brumbies couldn’t find the try they desperately needed.

Replacement half Ryan Lonergan spilling the ball after taking a quick tap instead of a gift three points in front of the posts that would have pulled his side to within a converted try typified the Brumbies’ off night.

Moana sealed the Brumbies’ fate with their fourth try five minutes from time through Lotu Inisi.