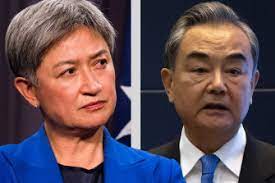 Chinese and Australian foreign ministers will launch duelling charm offensives in the South Pacific Thursday, as Beijing and the West jostle for influence in the strategically significant region.

Australia’s recently sworn-in Foreign Minister Penny Wong will meanwhile touch down in Fiji on Thursday as she embarks on her first solo overseas mission.

The diplomatic tours come as China seeks to deepen its foothold in the South Pacific, which has traditionally looked to the United States, Australia and New Zealand for security.

Travelling from Thursday until 04 June , Wang will also stop in Papua New Guinea, Fiji, Kiribati and Samoa, as well as hold video calls with Micronesia and the Cook Islands — a self-governing part of New Zealand.

The trip will be “beneficial to the peace, stability and prosperity of the Asia-Pacific region”, Chinese officials said.

Wang is expected to push for deeper relations and formal agreements with several countries.

But the trip has already stirred local controversy.

Solomon Islands’ journalists are threatening to boycott coverage of the trip after a “joint press conference” planned for Thursday evening was to feature only questions from state media.

The deal deepened US and Australian fears that President Xi Jinping intends to establish a military foothold in the South Pacific.

A leaked draft of the agreement contained a provision allowing Chinese naval deployments to the island nation, which lies less than 2,000 kilometres (1,200 miles) from Australia.

It also prohibited the Solomon Islands from speaking publicly about the deal’s contents without China’s permission.

News of the agreement sparked a diplomatic firestorm, with high-level Australian and American delegations flying to Honiara to warn about the risks to regional security.

Sogavare has said the concerns are overblown.

New Zealand’s foreign minister Nanaia Mahuta said he had received assurances on Wednesday “that the agreement will not lead to a Chinese military base”.

After speaking with her Honiara counterpart Jeremiah Manele, Mahuta also announced a one-year extension of a New Zealand military deployment to the Solomon Islands.

Australia’s new government has put deeper ties with the Pacific at the top of its agenda.

Foreign Minister Wong has admitted Australia is playing catch up, but said a trip in her first week on the job “demonstrates the importance we place on our relationship with Fiji and on our Pacific engagement.”

“I look forward to sharing our ideas on how we seek to bring together Australia’s defence, strategic, diplomatic and economic capabilities to support our region’s priorities,” she said.

“China has made its intentions clear. So too are the intentions of the new Australian government,” Wong said.

“I will be a frequent visitor to the Pacific, starting this week with a visit to Fiji as we lead up to the Pacific Islands Forum.”

“We want to bring new energy and more resources to the Pacific. And we want to make a uniquely Australian contribution including through our Pacific labour programmes and new permanent migration opportunities,” said Wong.

For Washington and its allies, the presence of Chinese forces in the South Pacific would spell an end to decades of efforts to contain China inside the “first island chain”.

It could also require a dramatic repositioning of U.S forces, which are currently focused on threats emanating from North-East Asia.

“We do know that (China) is seeking to establish a more robust overseas logistics and basing infrastructure that would allow the PLA [People’s Liberation Army] to project and sustain military power at greater distances.”

For Beijing, a base or port access would challenge US hegemony in the region and ease what it sees as encirclement by the West.

U.S seeks to seize superyacht in Fiji believed to be owned...