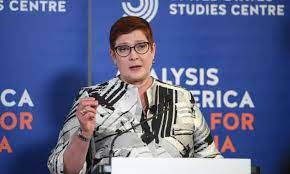 A proposal to double funding in the Pacific to reduce the Chinese infiltration in the region was knocked back by the Cabinet’s National Security Committee months before the Solomon Islands security agreement.

Payne presented the bolstered Pacific Step-up strategy to Cabinet in November last year during the mid-year budget process on the premise that Australia needed to improve its support for nations in the Pacific to minimise Beijing’s influence in the region, according to The Australian.

Prime Minister Scott Morrison has faced criticism from the Opposition for abandoning Australia’s partners in the Pacific with a lack of funding which they claim has allowed Beijing to secure a deal with Honiara.

The Foreign Minister’s proposal – which came months before the security agreement – included several funding options with the most dramatic being a doubling of funding for the Pacific from $1.44 billion to $2.88 billion (US$984 million – US$2 billion) by 2025-26.

Cabinet dismissed the proposal prepared by the Department of Foreign Affairs and Trade over concerns it was too expensive.

Cabinet did approve two cheaper elements of the strategy, a $300 million (US$210 million) extension to the COVID-19 support for the Pacific and a doubling of the lending limit in Australia’s Infrastructure Financing Facility for the Pacific to $3 billion (US$2.1 billion), the publication reported.

The plan would have quelled China’s ability to infiltrate the Indo-Pacific but the new security deal has opened up the possibility of a Chinese military base less than 2,000km from Australian shores despite Solomon Islands Prime Minister Manasseh Sogavare saying he would never allow such a base to be established.

If approved the proposal would have cemented greater support for the Pacific ties which could not be matched by China by offering more jobs to local workers and further university scholarships for future regional leaders.

Prior to the signing of the security pact, the Commonwealth Government pleaded with the Solomon Islands not to enter into the agreement with China.

Prime Minister Sogavare said he was “insulted” by Australia’s requests saying they showed a “continual demonstration of lack of trust”.

Sogavare also claimed his country had been threatened with invasion and likened the treatment to “kindergarten students walking around with Colt .45s in our hands, and therefore we need to be supervised”.

Despite Sogavare’s confirmation that no military base would be established Morrison said Australia was “very aware” of Beijing’s ambitions in the Pacific.

“We’re very aware of what the Chinese government’s ambitions are in the Pacific, whether it be in relation to facilities such as that or naval bases or other presence of their military in the Pacific,” Morrison earlier this month.

“I mean they’re doing this all around the world. I don’t think there’s any great secret about that.

The Prime Minister on Thursday said he was looking to visit many of the Pacific nations to reaffirm “relationships” in the Association of Southeast Asian Nations but insisted he had been in regular contact with Pacific leaders over the phone during the pandemic.

The security deal will no doubt be a major talking point at next week’s Quadrilateral Security Dialogue meeting in Tokyo between the leaders of the United States, Japan, India and Australia.

Opposition Leader Anthony Albanese has admitted he and Senator Penny Wong will be sworn in immediately as prime minister and foreign minister if Labor wins the election to ensure they can attend the discussions.

Morrison has also said he will attend the Quad meeting if he wins the election, or – under parliamentary conventions – if the result remained undecided.

Fiji votes in favour of UN resolution on Ukraine