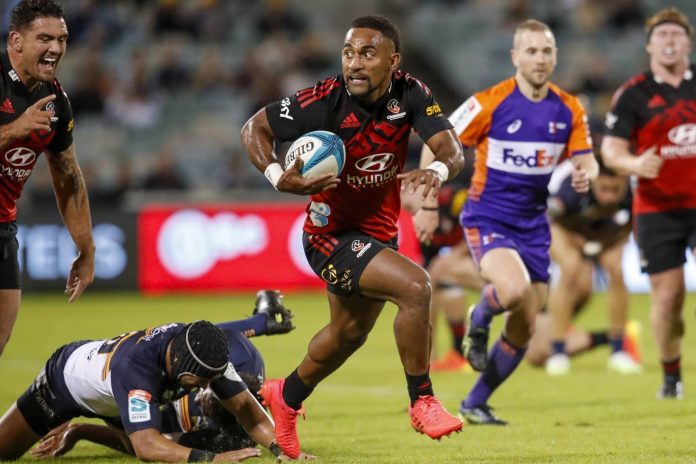 All Blacks wing Sevu Reece has been messaging brother Cyril in Fiji to say “ I could have been playing you on Friday night’’.

While Sevu Reece, 25, has been named on the Crusaders’ right wing for the clash with the Fijian Drua, Cyril, 30, will be watching from afar.

But they could have been on opposite sides for the Drua’s first Super Rugby Pacific visit to Christchurch.

“My older brother, he used to play for the Fijian Drua,’’ Reece said on Wednesday. “Just this year he stopped playing because he’s just had a little baby.

“I’ve been messaging him every time now, saying: ‘Oh man, I could have been playing against you this Friday.’’

Reece created Super Rugby history last weekend when he became the quickest player to reach 40 tries in his 50th match.

He could have been due a rest under the All Blacks rotation policy, but Reece made it clear to Crusaders coach Scott Robertson that he was never going to miss a date with the Drua.

“Yeah, this is one game that I’d love to play in,’’ Reece said, noting it was the same last year when he “got to play against the Flying Fijians’’, scoring a hat-trick of tries in a test in Hamilton.

Reece moved to New Zealand in 2014 to play rugby at Hamilton Boy’s High School, but grew up in Fiji “playing rugby with most of them’’ from Fijian Drua squad. “Some of them who are still playing now, I remember going to watch them when I was about 12 or a bit younger. Now getting the opportunity to play them is pretty exciting.’’

Reece met up with his Drua buddies when they were staying at the Crusaders’ hotel in Melbourne last month and he will “definitely catch up with them’’ after Friday’s match at Orangetheory Stadium.

He is delighted at the impact the Drua have made in their first Super Rugby season.

“My dad, and my whole family, they love watching the Fijian Drua. Just like any other Fijian … they’re always going to support the Fijian team.’’

“You look at the stands and see all the blue flags, everyone on their feet dancing and supporting the boys full. We will definitely get to see that here in Christchurch.”

Reece said watching the Drua’s games made him wonder “where was this when I was growing up? I couldn’t dream it’’.

He hopes the Drua’s advent will show youngsters that there is now a pathway, “especially for little kids throwing the plastic bottle pretending it’s a rugby ball. Now their dreams are going to be real. If kids work hard, the door’s right here for them.’’

Reece also expects more Fijian players at European clubs to “definitely come back and take the opportunity’’ to play Super Rugby, “one of the strongest comps we’ve got’’, following the example of test halfback Frank Lomani, who has returned from the Northampton Saints.

While Reece will be playing his countrymen, George Bower, another Crusader with Fijian heritage, is taking an enforced break.

Robertson said the All Blacks loosehead was disappointed but “deserves a rest this week’’.

“We were planning to do it a couple of weeks ago, but just with Covid and the way it worked out, it ended up being this game. He would have loved to have played against his brothers, it would have been pretty special for him. Shame.’’

Finlay Brewis will start at loosehead, with Tamaiti Williams continuing in the impact substitute role.

Robertson has made seven changes to the starting lineup that set up the 36-27 win over the Brumbies last week.

He has also rested in-form Argentina test flanker Pablo Matera and former All Black backrower Cullen Grace, saying the pair, who “accelerate into contacts’’ had had “a lot of load on their bodies’’ and “need a freshen-up”.

Captain Scott Barrett will move from lock to blindside flanker, with fellow All Black Ethan Blackadder named at No 8. Rookie lock Zach Gallagher returns in the second row alongside Sam Whitelock.

Ricky Jackson gets the nod over Shilo Klein to replace test hooker Codie Taylor, who Robertson expects to be back “in a couple of weeks’’ after a rib injury.

All Blacks stars Richie Mo’unga and Will Jordan also get the weekend off, with Fergus Burke starting at No 10 and youngster Chay Fihaki at fullback.

Centre Braydon Ennor will play his 50th game with Jack Goodhue moving inside to second five-eighth.

Leicester Fainga’anuku returns to the left wing after being a reserve for last week’s clinical 36-27 win over the Brumbies.

Crusaders team to play Fijian Drua in Christchurch on Friday.