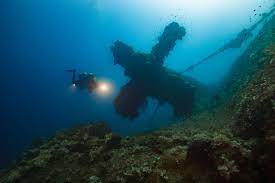 There are over 1200 potentially polluting shipwrecks (PPW) in the Pacific Ocean, many from World War II.

Chuuk Lagoon in the Federated States of Micronesia (FSM) contains the largest concentration of potentially polluting wrecks in the Pacific Ocean, 19 of which have been identified as posing significant environmental risks due to the volumes of toxic fuel oil and unexploded ordnance they hold.

The Australian Government is partnering with the Secretariat of the Pacific Regional Environment Programme (SPREP) and the Major Projects Foundation (MPF) to enhance existing efforts to address the risks to human health and safety, and to the environmental and economic security of nearby Chuuk communities, posed by the oil spills.

The Australian Government has committed AUD$2.12 million (US$1.5 million) to complement work underway by the Government of Japan through the Japanese Mine Action Service to remove oil from the high-risk wrecks in Chuuk Lagoon. It will also support SPREP and MPF to provide technical expertise and equipment.

Australian Ambassador to FSM, Jo Cowley, said Australia’s support responds to a key FSM priority, which recognises that the health of the ocean is fundamental to the sustainability of island life.

“Australia’s assistance will also build the capacity of the FSM Government to gather technical information on the wrecks and respond to the environmental risks posed by oil pollution in its waters,” she said.

The regional strategy outlines five key steps where the 13th SPREP Meeting in Majuro, Marshall Islands in 2002 approved the implementation of Steps 1 to 3, which were to identify and characterise wrecks, carry out a Generic Risk Assessment Ranking and agree on Intervention Assistance. Steps 4 and 5 targeted Site Based Risk Assessment and Remedial Action Implementation, which saw the removal of over 9 million litres of heavy fuel oil from the USS Mississinewa in 2002-2003.

“The announcement from Australia is timely and we are very pleased to be involved. Whilst there are a number of agreements, conventions, instruments, policies and other initiatives that require countries to work co- operatively to address marine pollution and protect the marine environment these do not apply to WWII,” Talouli said.

“The Pacific Ocean Pollution Prevention Programme (PACPOL) has developed a number of initiatives to assist Pacific Island members with marine spill prevention and response. Many Pacific Island countries and territories (PICTs) have used the National Marine Spill Contingency Plan (NATPLAN) template to develop their own national plans. The Pacific Islands Regional Marine Spill Contingency Plan (PACPLAN 2019) is a regional mechanism that was first endorsed in 2000 and provides the framework for co-operative regional responses to major marine spills in the Pacific Islands region and provides guidance on the roles and responsibilities of relevant organisations, regional linkages, and mechanisms for accessing regional and international assistance for pollution incidents.” he said.

Research Director of the Major Projects Foundation (MPF), Dr Matt Carter, pointed to the unique concentration of WWII wrecks at the Chuuk Lagoon, making it one of the world’s top dive destinations with as many as 10,000 divers per year visiting.

The risk of oil spill would severely impact the largest foreign income stream available to the 50,000 residents of Chuuk as well fishing, which is central to the economy and cultural traditions of the Chuukese people.

“We are delighted to partner with SPREP and the Australian Government to assist FSM. Our organisation is a marine research and conservation organisation with a focus on deploying engineering solutions to protect ecosystems and cultural heritage in the Pacific. This project and helping to make a difference in the lives of residents of FSM is at the core of what we do.”

In 2009 oil was reported leaking from the wreck of Hoyo Maru resulting in SPREP and the Chuuk EPA investigating the nearby beaches for evidence of oil. A report was commissioned from this work which concluded that potentially polluting wrecks ‘pose a grave and imminent danger to the people, marine and coastal environments, tourism and fisheries of the region.’

In 2011, the President of Micronesia appealed to the United Nations General Assembly for immediate assistance for help with the WWII shipwrecks in Chuuk Lagoon, describing them as “ticking environmental timebombs.”

In 2017, the Japanese Mine Action Service (JMAS) responded by beginning a mission to investigate these wrecks revealing the scale of the threat and the urgent need for increased collaborative action before they collapse. Recognising that these wrecks have been corroding underwater for over 75 years and that their collapse is rapidly approaching, in 2019 SPREP noted that despite the commendable work of JMAS, these wrecks still posed a significant potential environmental threat to the marine ecosystems, culture and livelihoods of the region.