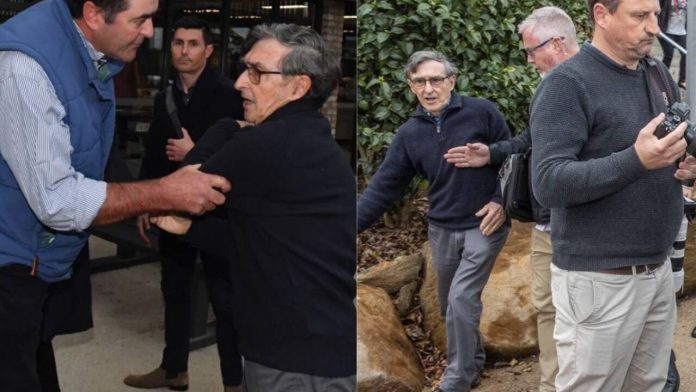 A former high commissioner to the Solomon Islands has questioned whether Australia is still a free country after being “manhandled” by Scott Morrison’s security when he tried to talk to the prime minister about mishandling the relationship with the Pacific Island nation.

Trevor Sofield, the high commissioner to the Solomons from 1982 to 1985, was at a cheese shop and cafe with his wife in northern Tasmania on Thursday afternoon when he approached Morrison, who was also at the venue on the campaign trail.

Speaking to The Sydney Morning Herald and The Age hours after the incident, the 78-year-old said he wanted to tell Morrison he had lost his vote for failing to stop the controversial security pact between China and the Solomons.

“I wanted to tell him this: ‘I have voted for the Liberals in the past but I am very, very concerned in the way in which you have not managed our relationship in the South Pacific’,” he said.

The security agreement between Honiara and Beijing has dominated the federal election, with Labor accusing Morrison and Foreign Minister Marise Payne of not doing enough to stop the pact from being signed. Australia fears the deal could pave the way for a permanent Chinese military presence in the Pacific Islands.

Sofield, who was Australia’s second high commissioner to the Solomons, said the Australian government had “lost the plot in regards to the Solomon Islands and the fact they are now entering into a relationship with China”.

Sofield said he was “terribly disappointed” at being manhandled by Morrison’s security team.

“This is meant to be a free country,” he said.

“I did get a little agitated because of the way I was manhandled … I played international hockey for something like 20 years, so I’m used to big fullbacks trying to constantly intimidate me.

“I will respond to any attempt at bullying or intimidation. I found it quite extraordinary – the prime minister is in a public space, he is here to meet the public, particularly members of the Bass electorate.

“I simply wanted to talk to him and express a point of view. I don’t have my hockey stick with me, I’m not about to cause him any particular physical concern.”

Sofield told the media pack in Tasmania that he saw Morrison walk into the cheese shop and decided to deliver his message in person.

“And that’s when suddenly I find I was surrounded by guys on either side of me, and right at the end, one of his female minders went up to the owner of the establishment and asked him to order me off the premises,” he said.

Sofield then tried to follow the prime minister outside but was again prevented by minders from approaching him.

“I was high commissioner [in the Solomon Islands] for four years – I think I have an insight into the way in which we have totally mishandled this particular aspect of our foreign policy. I’m in the electorate of Bass and the Liberal Party has lost my vote because of this major strategic blunder.”

Sofield said the Liberal Member for Bass Bridget Archer did have his vote for crossing the floor on an integrity commission last year, but the Solomons deal had lost it.

He also criticised the Coalition government for cutting the foreign aid program and said Morrison and Payne should have visited the Solomons more regularly. He said the Pacific “Step Up” policy was “too little, too late”.

“I find it incomprehensible that we did not know in advance what was happening in Solomon Islands this time. It just couldn’t have happened previously,” he said.

Sofield said it was a “good question” whether Labor would do a better job but that a new government would be an opportunity to reset the relationship.

Sofield left the foreign service in 1989, becoming an academic and co-owning a resort in the Solomons.

“And that’s when we started to lose the plot. Before that outbreak, the Solomon Islands asked for a small contingent of police – my understanding was [about] 20 police [officers] – to help control it before things got out of hand.

“At the time, the Australian government refused. I talked to the then-minister at the time. He said, ‘We’re not interested in helping those pissy little countries, they can look after themselves,” he said.

Solomon Islands PM: Country will never host any military base