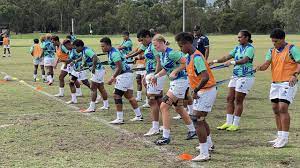 Fijiana 15s side will host a test match against Canada in preparation for the upcoming Rugby World Cup but a date is yet to be confirmed.

Coach Senirusi Seruvakula confirms that talks are already underway to have the game in Fiji which would give them more game time.

“There’s a test match haven’t been confirmed, playing against Canada when we come back from the Oceania so that’s the last test match that will be held in Fiji before we go to the world cup.”

However, Seruvakula says for now the important thing is to give the players a bit of recuperation before they are back on the training field again.

He says it’s been a wonderful Super W journey with the Drua side and winning it was the icing on the cake.

Seruvakula also adds that the two test matches against Japan and the Wallaroos was perfect as it gave him a fair idea of what the team is also capable of.

Meanwhile, going against some of the best in the world was a needed learning experience for the Fijiana 15s side as the World Cup looms.

Captaining the side to the test against the Wallaroos, Sereima Leweniqila says it was a good preparation ground, getting a feel of what to expect when teams gather in New Zealand in October for the World Cup.

Leweniqila says it wasn’t easy from the first day and things are expected to get tougher as the date draws closer.

“It was a hard journey, a roller-coaster ride. We had our up moment and we also had our bad moments but what an experience it was to go against some of the best in the World.”

Leweniqila says the team is glad to be back home, especially with a number of them getting home sick just after a few weeks in Australia.

The 32-year-old adds they will take their much needed rest before heading onto the field to continue with preparations.