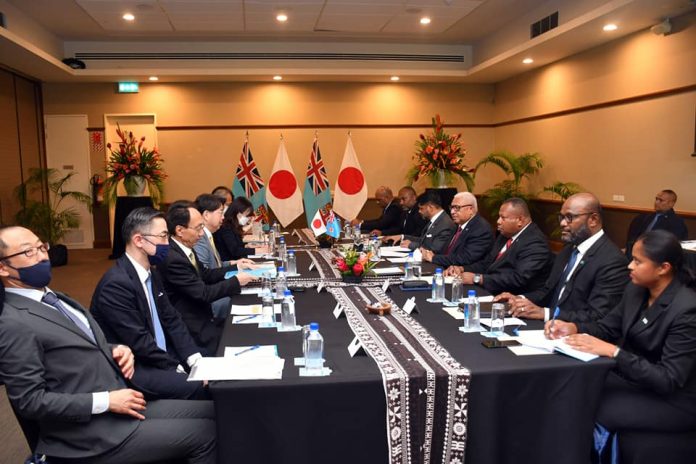 The Pacific Collective on Nuclear Issues (the Collective) is calling on Japan’s Foreign Minister, Yoshimasa Hayashi, who visited Fiji and Palau on the weekend, to reconsider Japan’s plans to dump over one million tonnes of radioactive waste into the Pacific Ocean as early as next year.

According to the Japanese Government, Minister Hayasi toured the two Pacific states to promote a “free and open Indo-Pacific”, aimed to diminish China’s growing military and economic influence in the region.

The Collective, which represents several Pacific civil society organisations, reiterates its call for the Japanese Government and the Tokyo Electric Power Company Holdings, Inc. (TEPCO) to stop their plans to discharge over 1.28 million tonnes of radioactive waste into our ocean.

“We hope that the leaders and government officials in Fiji and Palau will use the opportunity to reinforce the message to Minister Hayashi that our ocean must not become a free dumping ground for nuclear wastes from the Fukushima nuclear power plant – one of the greatest nuclear disasters of our times”.

The Pacific has suffered the consequences of nuclear testing for generations and people continue to live with the damage done by historical nuclear tests by major powers; the United States, the United Kingdom and France.

Therefore, as stated previously, the Collective refutes the veracity of TEPCO’s Radiological Impact Assessment (RIA) released in November 2021. The RIA does not consider the concerns raised by Pacific leaders and other neighbouring governments who oppose the current proposed plan by Japan.

Pacific leaders who were never consulted about the decision have called for all alternative options that does not impact the Pacific Ocean including storage of nuclear waste material on land. The Collective firmly believes the current plan is in breach of the Pacific Nuclear Free Zone Treaty, and International Laws and Treaties such as the London Convention on the Prevention of Marine Pollution.

The Collective continues to hold the view that TEPCO, and the relevant Japanese Government agencies, have wilfully and wrongly prioritised convenience and costs of releasing contaminated radioactive waste over the short term and long term environmental and human cost of their planned actions.

“We believe there is no scenario in which discharging nuclear waste into the Pacific Ocean is justified for the health, wellbeing, and future safety of Pacific peoples and the environment” it said in a statement.

No promise made to Bougainville: PM Marape