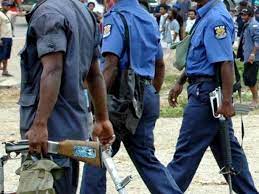 Anyone caught with an illegal unlicensed firearm in Papua New Guinea, faces life in prison.

With nine days to go before the Issue of Writs, Police Commissioner David Manning says there is a two-week amnesty to have all firearms surrendered to police across the country.

He reminded the country that the maximum penalty for uncontrolled usage and ownership of firearms is now life imprisonment.

“I am also aware that there are many other reasons for people to be in possession of firearms and I am prepared to grant a two-week amnesty to have those firearms surrendered to the nearest police station.

“After that, consider yourselves sufficiently warned and prepare to face the consequences thereafter,” Mr Manning said.

“It is estimated that we have several hundred factory produced weapons in the hands of criminal gangs, tribes, and individuals and several thousands of various caliber homemade guns throughout the country.”

Manning said: “My appeal now is to whoever has any information about the existence of any such firearm in their communities please come forward and assist your police force to remove these individuals and firearms from our communities.

“Be assured that the new amendments will ensure they will go away for a very long time,” he added.

He said: “It is very encouraging to note the recent bold and appropriate amendments brought about by the Marape-Basil government in the last sitting of the country’s 10th Parliament.

I witnessed the passing of the Bill with unanimous support from both sides of the floor of Parliament.”

“The amendments are necessary and conducive to addressing the long standing crime situation in the country involving the use of firearms.

Our communities are being held at ransom by violent individuals who indiscriminately commit horrendous acts of violence with the use of firearms.”

The cost of crimes committed through the use of firearms, whether factory produced or homemade guns, goes beyond the tragic loss of life and property, “he added.

“Families, communities and the country suffer long after the act has been committed. It is about time this enabling piece of legislation was amended to ensure we adopt a “zero tolerance” to this scourge and impediment to our collective goal of having secure and safer communities,” Manning said.

“When the formal process of ratification is completed we will enforce this amended law during this election period and continue to vigorously enforce this after the elections.”

From experience, the use of high powered weapons was clearly evident, especially in the highlands region, during the 2012 and 2017 elections.

The prevalence of such weapons in the hands of tribal leaders and their supporters is becoming a serious concern in the stability of the region.

Prime Minister James Marape said that the recently passed Firearms Act makes life imprisonment mandatory for anyone caught with a firearm, legal or illegal, and who is unlicensed to carry such a dangerous weapon in public.

Marape and Manning have reminded the country that the maximum penalty for uncontrolled usage and ownership of firearms is now life imprisonment.

He said that the, “recently tabled the Firearms Amendment Bill 2022 in Parliament, unanimously supported by all MPs, for life imprisonment for unlawful possession of firearms”.

Manning said that police would be arresting those found to be in possession of any firearm and charging them accordingly during the election.

“As I have always stated, the high number of firearms coming into the country is a concern and I want those found in possession with no proper permits to be dealt with accordingly.”

In 2018, Parliament passed gun laws which included fines and five years for the use of unlicensed firearms or the misuse of licenses firearms, manufacturing firearms attracted a 10-year jail sentence.

Marape said that the amendment tabled in Parliament on its last sitting day will see harsher penalties.

Marape said the country had had enough of illegal firearms issues, including in the 2017 National General Election when there were several gun-related deaths, and added there would be zero tolerance this time.
“I remind people on the eve of elections that life imprisonment is now the maximum penalty for illegal possession of firearms,” Marape said.