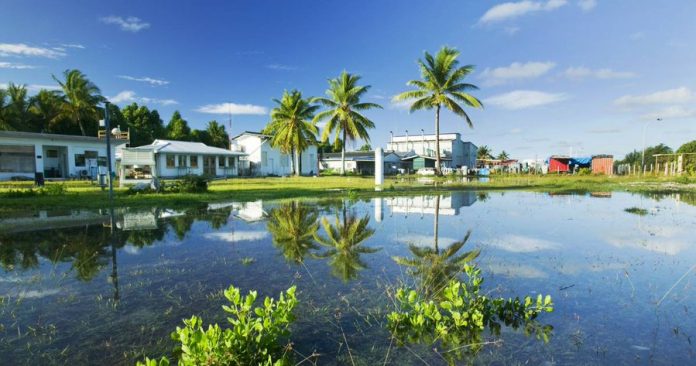 Former Pacific island leaders have called on Australia to take “credible and urgent actions on climate change” and criticised a lack of consultation with the region after Solomon Islands’ shock decision to sign a security pact with China.

In a statement released hours before Solomon Islands Prime Minister Manasseh Sogavare savaged Australia’s decision to sign the AUKUS pact without notifying the Pacific, the Pacific Elders Voice group declared ongoing political tensions ignored the fact climate change is the region’s greatest security threat – and that Australia, China and the United States have done too little about it.

“These nations have done very little to address their own greenhouse gas emissions, despite statements of intent by the nations,” says the statement, signed by the former leaders of the Marshall Islands, Palau, Kiribati and Tuvalu.

“We are concerned that major powers, including the U.S, Japan and Australia, are developing strategies and policies for the ‘Indo-Pacific’ with little, if any, consultation with Pacific Island countries.”

The group called on regional partners, “particularly Australia, to undertake credible and urgent actions on climate change, to demonstrate their genuine commitment and empathy for this biggest security threat to the Pacific Island states.”

It was a call repeated by local Pasifika communities in western Sydney last week, who for the first time held an election forum to elevate their concerns about climate action to politicians ahead of the 21 May ballot.

The Liberal Party failed to send a candidate to the Pasifika Climate Change Pre-Election Forum, during which the community had sought to share their personal tales of how climate change was affecting them in western Sydney as well as their families in the Pacific.

Lidcombe Uniting Church minister Uilisone Mafaufau accused the government of being “missing in action” as he told 200 attendees from across Sydney and the Pacific that he was angry it had not engaged with the Pasifika community.

“That empty chair is very disappointing, upsetting, and to tell you truth … making me very angry. We have informed [the Liberal Party] about the climate change focus of this meeting. And we have tried all we can to ask the LNP to join us,” he said.

“This is how much they think of us Pacific Island Australians … You’d start to ask: Why are the Solomons [turning] somewhere else?”

Sydney Pasifika community leader Reverend Alimoni Taumoepeau said there was anger because Pacific Island voices had been “marginalised for a long time”.

“Perhaps because we are migrants ourselves, we are coloured people, we are not really recognised as people of power … We understand that Australia is very interested in the Pacific Islands, but we know [it is] because of national security.

“Pacific Islands want the big brothers and sisters of our region to listen to our concerns, hear our hurt. Climate change is a crisis in the Pacific: Tuvalu and the Marshall Islands are already drowning. Tonga, Samoa and Fiji are going the same way.”

Taumoepeau said it was not too late to repair the damage. “We need to allow space for our stories to be heard, and for Pacific Islands concerns to be recognised by our political leaders.”

According to the government, Australia has reduced its emissions by 20 per cent below 2005 levels, faster than similar developed economies such as Canada, Japan, New Zealand and the United States.

However, analysis by Crawford School of Public Policy honorary associate professor Hugh Saddler, shows Australia’s industrial emissions have continued to rise. If the changes to historical rates of land clearing were excluded, national emissions would have in fact risen by about seven percent.

Dr Wesley Morgan, an expert in Pacific Island affairs from Griffith University, said Australia’s reputation and standing in the Pacific had been badly damaged over the past two decades due to its climate politics.

“We want to be the security partner of choice to the Pacific, but when Pacific leaders tell us their number one security threat is climate change, we ignore them,” he said.

He said that the joke made by then Immigration Minister Peter Dutton in 2015 that Pacific ministers had been late to a meeting because “time doesn’t mean anything when you’re about to have water lapping at your door” typified Australian attitudes to many in the Pacific.

“It was offensive to Pacific leaders but they were not surprised,” said Dr Morgan, who is also a researcher with the Climate Council. “It confirmed a widely held view that Australia does not take the Pacific’s key security concern seriously.”

Dr Morgan said that Pacific leaders “feel this as a personal affront.”

Dr Morgan said the concerns had been made clear to Australia for decades, with Pacific leaders at the forefront of a campaign to have climate recognised as a security threat by the United Nations Security Council.

In 2013 Marshall Islands foreign minister, Tony De Brum told the UN Security Council, “in whose warped world is the potential loss of a country not a threat to international peace and security?”

In 2018 Pacific leaders issued a regional security declaration reaffirming climate change is ‘the single greatest threat to the livelihoods, security and wellbeing of the peoples of the Pacific’. At the time it was widely reported that Australia sought to water down the language.

In 2020 Solomon Islands’ high commissioner to Australia told a senate hearing, “Lest we forget, climate change, not COVID-19, not even China, is the biggest threat to our security.”

When asked if Australia should be doing more on climate during a 2019 forum at Australian National University the Solomon Islands diplomat Collin Beck, Permanent Secretary, Solomon Islands Ministry of Foreign Affairs and External Trade.

“When we talk about climate change it is basically a life and death situation for us. We want everyone, including Australia, to do their fair share.

“I’m not sure how you define genocide,” he went on. “When you basically know that people are going to die, but you allow that to happen. Science is very clear on this,” he said.