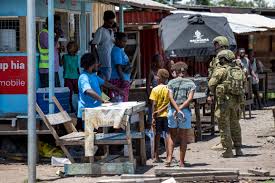 Australia will resist sending soldiers and police to Solomon Islands if they are forced to operate alongside Chinese security personnel as concern grows that Beijing will deploy brutal and repressive tactics in the Pacific island nation.

Home Affairs Minister Karen Andrews on Wednesday warned it was “very likely” China would attempt to send troops to Solomon Islands, while also claiming Beijing had politically interfered in Australia’s election without providing any evidence.

More than 100 members of the Australian Federal Police and Australian Defence Force were sent to the Solomons last November to help Prime Minister Manasseh Sogavare quell a violent uprising.

But the Australian government is now rethinking its approach in the wake of the country’s controversial security pact with China.

Australia’s top spy, Andrew Shearer, confirmed on Wednesday there would be concerns with “unity of command” on the ground if Australian and Chinese forces had to operate side by side.

“We are also concerned that in such a fragile, volatile country, Chinese policing techniques and tactics that we have seen deployed so ruthlessly in Hong Kong, for example, are completely inconsistent with the Pacific way of resolving issues and could incite further instability and violence in the Solomon Islands.”

Shearer said the security deal “wasn’t an intelligence failure, this strategy has been unfolding for a number of years”.

He also warned China wants a region “where it has sustained military presence” so it can make it more difficult for the American and Australian military to operate in a crisis.

China currently has security advisers on the ground in Solomons, but there are fears from within the Australian government the new security pact could pave the way for Beijing to deploy a frontline police and military presence in the country.

Government sources said Australia would still look to support the Solomons in the future, but would ensure its forces wouldn’t be operating alongside Chinese personnel.

Michael Shoebridge, director of the defence program at the Australian Strategic Policy Institute, said any future deployment of Australian defence and police personnel would have to be “entirely separate” from Chinese security.

“The way the Chinese presence would operate would be brutal and repressive – just like they are at home – and we would not want to be complicit or accountable for their behaviour,” Shoebridge said.

Jonathan Pryke, director of the Lowy Institute’s Pacific Islands program, said the prospect of Australian and Chinese forces being asked to defend the same areas and assets was a “real volatile situation”.

He said the reality is, Australian police are seen as a trusted third party in the Solomons, with previous surveys showing more than 70 percent of the population were supportive of their presence under the Regional Assistance Mission to Solomon Islands operation between 2003 and 2017.

“We have been the security backstop in that country since 2003, and we should retain that commitment,” he said. “But we should also make it very clear that we would be very worried how to manage it operationally were China asked to do the same.”

The agreement to allow Chinese armed forces to protect its Solomons infrastructure, less than 2000 kilometres off Australia’s east coast, has dominated the past week of the federal election campaign. Prime Minister Scott Morrison and Foreign Minister Marise Payne have been criticised by Labor for not doing more to stop the deal from being signed.

Andrews on Wednesday suggested the timing of the announcement might have been deliberate to harm the Coalition’s chances at the election.

She said Beijing was “clearly very aware we are in a federal election campaign at the moment” and alleged it was “political interference”.

“I think the one … thing we should be at least taking notice of and paying attention to is the timing of the announcement from deals in relation to the Solomon Islands,” she told Brisbane radio station 4BC.

Labor’s home affairs spokeswoman, Kristina Keneally, said the government needed to share any proof it had of foreign interference with the opposition, considering it is in caretaker mode.

“If Karen Andrews has such intelligence, Labor should be briefed,” she said on Twitter.

Albanese will ‘engage’ with East Timor as Dili signs deals with...