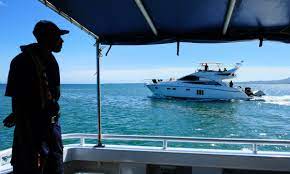 Although Pacific Island countries do not experience high levels of criminality, shifts in transnational dynamics are changing the region’s organised crime landscape. More needs to be done to address these emerging issues multilaterally.

The Boe Declaration, signed by the leaders of the Pacific Islands Forum in 2018, is the most recent statement of security priorities in Oceania. It advocates for an increased emphasis on transnational crime as part of a suite of concerns that are significant for the region, all within an expanded concept of human security. This concept goes beyond traditional definitions of security and includes considerations such as food and resource security, with a particular focus on safeguarding fisheries in a number of countries.

Initiatives such as the Global Organised Crime Index 2021 – which not only includes data from the region but also provides insights at the subregional level, with scores for Melanesia, Micronesia and Polynesia – make an important contribution to a developing and expanding debate. The Index adds to other research that reveals shifts in how particular aspects of organised crime are manifesting in Pacific Island countries.

For example, the dynamics of how illicit drugs are moved across the Pacific by crime syndicates from Asia as well as drug cartels from Mexico and South America to lucrative markets in Australia and New Zealand have changed. Increased connectivity and the effects of criminal deportees who have been returned to Pacific Island countries have led to nations such as Tonga, Samoa and Fiji becoming sites of production as well as consumer markets.

It is important to track and document such shifts, as they have the potential to erode the resilience of states not only to withstand any one particular threat but also to protect their societies and economies from expansion into other organized crime activities.

Organised crime can take many forms within the Pacific Islands region. On the surface, it may appear that the region is faring well; however, in addition to drug trafficking, low-tax jurisdictions such as Vanuatu are vulnerable to money laundering. Elsewhere, such as in the Marshall Islands, human trafficking is an ongoing risk.

In the Organised Crime Index rankings, Oceania has an overall criminality score of 3.07, which is significantly lower than the global average of 4.87. However, although the number of criminal actors or markets may be minor in absolute terms, their impacts can be substantial in these small economies and societies. In contexts where senior state officials are not well paid, the potential for criminal actors to subvert governance by way of bribery is high. Meanwhile, countries such as Tonga and Samoa are having to deal with the socio-economic impacts of increasing drug use and addiction with scarce resources.

The Index can and should be a valuable resource for security actors, as such data can help strengthen national and regional capacities in the Pacific, and support allocations of finite – and often constrained – resources to where they are most appropriate. This is an important point to acknowledge, especially given that the Boe Declaration identifies organised crime as one of six focus areas when it comes to regional security. There is no doubt that Pacific Island countries have much to gain by working collaboratively with one another and with other key partners in the fight against organised crime.

However, it is essential that such collaborations are Pacific-led so that the region’s priorities are taken into account. There have been concerns among Pacific law enforcement officials that external partners have been reluctant to fully share key intelligence and information. As the Boe Declaration Action Plan is implemented, this is a key area that will require attention.

A key finding of the Index is that democratic countries have greater resilience to organized crime. This is of particular relevance in the Pacific Islands region. As we have seen elsewhere in the world, there has been a shift to autocracy in several countries across the region. This manifests in a number of ways, including by imposing restrictions on media, threatening to close down social media, constraining civil society and attacking the independence of the judiciary. In some cases, the impacts of COVID-19 have accentuated these tendencies.

Democratic culture needs to be nurtured to protect communities from the economic and social harms associated with organised crime. In this, there is much diversity across the region. Cultural norms and the effects of colonialism are significant factors that inform how democracy is conceived, understood and practised in these countries.

For example, the presence of clientelist politics, such as in the Solomon Islands, is intertwined with cultural expectations of how powerful men provide for communities, including meeting everyday needs. In Samoa, only those who hold a matai (chief) title are allowed to stand for parliament, which does not necessarily align with expectations of universal suffrage that may apply elsewhere. This provides the underpinnings of how a given society may be susceptible to risk of increased criminality. Conversely, these norms can also be part of how communities build their resilience to withstand such risks.

Organised crime is not new to the Pacific Islands region. But due to the increased transnationality of organised crime, criminal actors are changing their modes of operation, including developing new markets in the region. Avenues such as digital connectivity – which are welcomed for their potential to empower, educate and entertain communities – can and will be used to sustain organised crime. There is a need to build and maintain political, economic and social resilience. Tools such as the Organised Crime Index can play an important part in how regional leaders understand the risks they face and how they might address them.