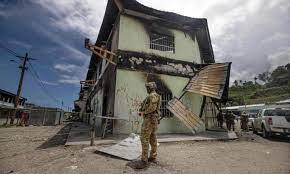 The claim was made by former Solomon Islands prime minister, Danny Philip, who is now the chair of the current government’s, foreign policy advisory subcommittee.

Speaking during a webinar hosted by Georgetown University’s Centre for Australia, New Zealand and Pacific Studies and the University of Hawai’i’s Centre for Pacific Islands Studies, Philip said his country’s new security agreement with China was born of a desire to protect Chinese assets in the country in case of future unrest.

“A very senior diplomat from the Australian High Commission, said very plainly to us that their presence here was not to protect any Chinese interests, this needs to be verified but as a government it was said to us in no uncertain terms they are here not to protect Chinese investments, Chinese infrastructure.

“So that gives rise to other considerations in the minds of the Solomon Islands government to get the Chinese police to come in and train our own police … to handle the situation such as we have last November.”

Asked if this was the primary goal, he said the agreement was also aimed at protecting Solomon Islanders too.

The Australian high commissioner to Honiara, Dr Lachlan Strahan, said the claim was incorrect, pointing out that under Australia’s bilateral security treaty, Australian police and military personnel were subject to the command of the Royal Solomon Islands Police Force.

“Australia’s security deployment is at all times conducted in accordance with the Royal Solomon Islands Police Force’s (RSIPF) priorities and direction. Our forces sit under RSIPF command under our bilateral security treaty, and we do not discriminate in the delivery of our security support,” he told the Guardian.

Chair of the Solomon Islands’ parliament’s Foreign Relations Committee and a member of the opposition, Per Kenilorea told the panel that he didn’t believe the agreement was necessary or that his country would benefit from it.

“The agreement is one that I don’t feel that we need at this time. Solomon Islands won’t benefit as a nation from it. I say that because of our size, we are 700,000, our police probably about a 1000 police officers.

“The issues that have been affecting us have been focused on Honiara, much of Solomon Islands is still a peaceful country.

“Much of the problems recently … are linked to politics and political issues that have led to flare ups and unrest, so I just don’t think a treaty or diversifying our security will add value to our current security arrangements and set up.

“So I don’t think is a path we should take or that it is a path would benefit Solomon Islands. I think the biggest winner here will be the People’s Republic of China, in terms of a foothold in the Pacific region.

Another member of the panel on Islands Security Agreement and Blue Pacific (in)securities, leading Solomon Islands Academic, Dr Transform Aqorau said it was concerning that no one outside the government had seen a copy of the signed agreement or been provided with any detail of its content.

“I personally don’t see anything wrong with the idea of an agreement with donors to training and equipping the Royal Solomon Islands Police Force (RSIPF) … to ensure that Solomon Islands is safe, law is enforced and those that break the law are dealt with accordingly.

During the panel discussion, Philip also alleged that Australian security forces had twice failed to prevent the burning of Honiara’s Chinatown, the first time under the auspices of the Australian-led Regional Assistance Mission to Solomon Islands.

“(A) wave of violence that happened here in Solomon Islands happened during 2006 election … when RAMSI was still here, very much in full presence and also RSIPF and Chinatown and some of our hotels were burnt down.”

“The latest (wave) in November was the same, we have the presence of Australian police and maybe army personnel were here and still we have Chinatown burnt down.”

In fact, Australian police and troops which were mobilised within 24 hours of Solomon Islands government’s request made on the evening of the first day of the riots, only arrived in the country the day after Chinatown was burned down.

“Australia was not responsible for the damage done to Chinatown. Australian forces helped to restore law and order in the city at a critical time,” the high commissioner said.