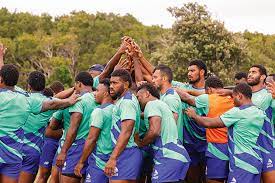 The one-week break was an opportunity to freshen up for the Fijian Drua and reflect on what they can do better this week against the Blues.

Byrne said this weekend will be an opportunity for the Drua to measure themselves against the best.

“The boys have chatted about it, these are the games that they’re really looking forward to, and as we’ve said many times we’ve grown up watching Super Rugby and the teams that they’ve looked at have been the successful teams and over the years it’s been the NZ sides”

Byrne said they know going up against a team laced with All Blacks players will be a robust battle.

“They’ve got All Blacks around the park, at the front out the back, we just need to make sure that we meet fire with fire – so to speak. They’re going to come our pace and we have to match their pace, the boys are really excited of the opportunity to go out there and take them on.”

Byrne said for a top tier team, the key this weekend is to be ahead of their game.

“We’ve worked hard, we’ve talked about it on our week off and we’re working hard this week to making sure we’re getting back – urgent to get back and get set. And if we can get back and get set early that will allow us to come forward early as well so it works both ways.”

Seven games including the Super W final between the Fijiana Drua and Waratahs will be played at AAMI Park starting on Friday.

The Chiefs and Waratahs clash on Friday at 8pm and Moana Pasifika against Force at 10:30pm.

There’ll be three games on Saturday starting with the Fijiana and Waratahs final at 4pm, Blues and Swire Shipping Fijian Drua at 7:05pm followed by Hurricanes and Reds at 9:45pm.

On Sunday, the Highlanders meet Brumbies at 4pm then Crusaders faces Rebels at 6:30pm.