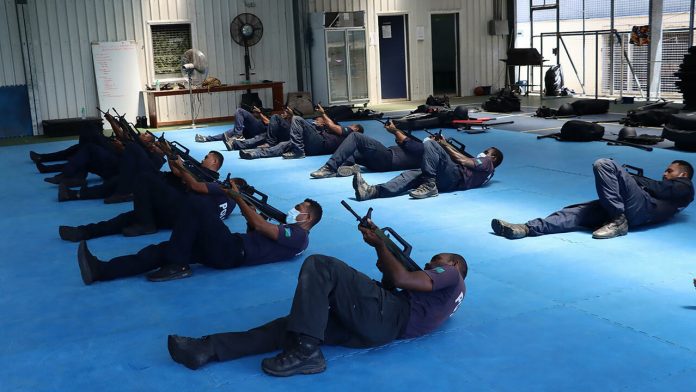 The Guardian has received a copy of the documents, dated 03 December 2021, in which China requested security personnel be allowed to enter the country to secure the Chinese embassy in Honiara, in the wake of the riots there in November.

In a leaked memo in response to the request, also obtained by the Guardian, Solomon Islands’ permanent secretary for foreign affairs said he had “no objection” to the request from China, as the Pacific nation had not been able to guarantee the safety of Chinese embassy staff during the riots.

In its diplomatic note, China said the deployment of the security team was necessary in light of “the current security situation in Solomon Islands”.

“The government of the People’s Republic of China has decided to send a plainclothes security team (10 personnel) with necessary light weapons and equipment to the Chinese Embassy in Solomon Islands. The team will be responsible for internal security and necessary escort missions outside of the Chinese Embassy,” the diplomatic note said.

The security team were to hold diplomatic passports and travel with the official status of “Attache of the Chinese Mission”.

The diplomatic request informed Solomon Islands that Chinese personnel would be bringing with them weapons and equipment including 10 9mm pistols, 10 rifles, two machine guns and a sniper rifle, as well as other equipment including radios, satellite phones, infrared thermal cameras, 10 daggers, 10 electric batons, an electronic listening device, gas masks, and metal detectors.

According to the leaked memo from Solomon Islands’ foreign ministry, permanent secretary Collin Beck said he had “no objection” to the security team’s presence in the country for a “six to twelve-month period”, though the Guardian has not been able to confirm whether or not the security team arrived in Honiara.

“The request stemmed from the recent three days of from [sic] 24-26 November riots of which Solomon Islands Chinese community faced the brunt of the looting and violence amongst other business houses,” Beck wrote.

Solomon Islands suffered days of rioting and violence in November, fuelled in part by anger over prime the minister, Manasseh Sogavare’s, decision to switch the country’s diplomatic allegiance from Taiwan to China. However, other issues, including tensions between two of the largest provinces in the country and economic hardship were also at play.

Chinese-owned businesses were targeted in the riots and many buildings in the capital of Honiara’s Chinatown were burnt down.

“My Ministry during the period could not guarantee the safety of the Embassy and staff. As host country we had an obligation to protect all Embassies including [the] Chinese Embassy, in this regard, we have no objection to the request,” Beck wrote in the memo.

Beck added that while “sadly this sets a precedent”, that “China is a special case noting public debate was and remains directed against China’s interests in the country from certain quarters of our country’s population.”

The Solomon Islands government confirmed the veracity of the documents in a statement issued late on Tuesday, as it cautioned the public “to be alert against fake news or misinterpreted commentaries on social media forums following leaked documents containing official correspondences between the Solomon Islands Government and the People’s Republic of China (PRC) Embassy in Honiara”.

“There is nothing to be concerned about,” the government statement said.

Solomon Islands has been at the centre of a geopolitical storm in recent weeks after a draft security agreement between China and Solomon Islands was leaked, which outlines the process by which the Pacific country would request assistance from Chinese police, armed police, military personnel and other armed forces.

According to the draft text, the agreement would allow China to “make ship visits to, carry out logistical replenishment in, and have stopover and transition in Solomon Islands”, leading to fears that China could secure a naval base less than 2,000km from Australia’s east coast.

Since the draft deal leaked, Sogavare has sought to allay concerns by saying his country has no intention of allowing a Chinese naval base. He added it is “very insulting to be branded as unfit to manage our sovereign affairs”.

In a sign of Canberra’s worries about the deepening security cooperation between the Solomon Islands and China, an Australian government minister was set to fly to Honiara late on Tuesday for two days of talks.

The minister for international development and the Pacific, Zed Seselja, said he would raise concerns about the proposed security agreement.

He said Australia had “stood strongly as a partner and a friend of Solomon Islands” for many years and believed “the Pacific family will continue to meet the security needs of our region”.

We have no choice but to fight for our future