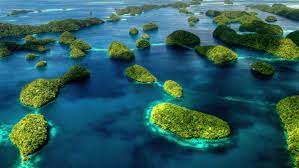 A former leader of Palau is “frustrated” about the foreign fishing lobby trying to influence national leaders to get rid of a critical law aimed to protect its exclusive economic zone (EEZ).

According to the UN, the Palau National Marine Sanctuary Act was among “the world’s most ambitious ocean conservation initiatives” that closed off 80 percent of Palau’s EEZ to commercial fishing as well as other activities like deep-sea mining and oil exploration.

But there are concerns that legislators are trying to remove this law to open the marine protected area as an option to increase economic activity to ease the financial hardships brought about due to the Covid-19 pandemic.

Speaking to RNZ Pacific ahead of the seventh Our Ocean Conference, which starts on Wednesday, former president Tommy Remengesau Jnr, claimed “a few of Palau’s leaders” were working with the foreign fishing industry to “do away” with the landmark legislation.

The Marine Sanctuary Act – which came into effect in January 2020 – was a science-backed response to fight climate change, backed by the traditional leaders of Palau, the council of chiefs, who also support the maintenance of the marine sanctuary.

Remengesau fears that removing or changing the law would open Palau’s waters for exploitation.

“We will do all our best as Palauans, as a culture, [and] as a society to make sure that they don’t open up the marine sanctuary.”

Remengesau is also a founding member of the Pacific Elders’ Voice (PEV), which released a statement last week, calling for the Ocean Conference to come up with “meaningful outcomes” to protect the marine environment from a range of threats.

He acknowledged that while the climate crisis was the biggest threat to the security in the region, “it cannot be discussed without addressing the oceans”.

The ocean plays a fundamental role in mitigating the impacts of climate change by absorbing carbon dioxide as well as most of the extra heat created by human-induced greenhouse gas emissions.

“The health of the ocean is very influential and very important to our survival,” Remengesau said.

“It affects our culture, our food security, our economy. It affects the social and regional way of life interactions. I’ve always said that the ocean is our economy and the economy is our ocean.”

“Our Ocean Conference doesn’t necessarily have to be economics in the sense that people with a business interest benefit from.”

“It has a lot to do with what science is telling us, with what is the livelihood of the people who depend on the ocean, and with what can the Pacific Islands provide answers to climate change because we do have ownership of the vast ocean and that is not just the Pacific but the world needs in order to address many of the issues of climate change.”

The government of Palau said it was trying to find a balance between conservation protection and production.

The government has come under fire over plans to reopen the Palau National Marine Sanctuary to commercial fishing.

The Minister of Agriculture, Fisheries and Environment, Steven Victor, said for many years Palau has been very ambitious in the protection of the environment.

He said 80 percent of the marine sanctuary is closed off to fishing.

“We are at a juncture at this ocean conference where we are realising some of the weakness of having an 80 percent closure and we need to re-adjust that,” he said.

Victor said there was a lot of noise in the Palauan community and globally that re-adjusting 80 percent is rolling back conservation but he said that’s not what the government is trying to do.

The former president was also urging Pacific Island nations to take the lead in protecting 30 percent of their ocean territory by 2030.

“This is obviously an international commitment that I hope we come together and really set aside large portions of our marine and terrestrial resources for the protection of our own people or indigenous people,” Remengesau said.

He said when large ocean states take the lead to provide an answer, it will put pressure on the international community to also be part of the solution to reduce emissions “that is contributing madly to the climate change crisis.”

Meanwhile, Remengesau has confirmed he has not been officially invited to the two-day conference.