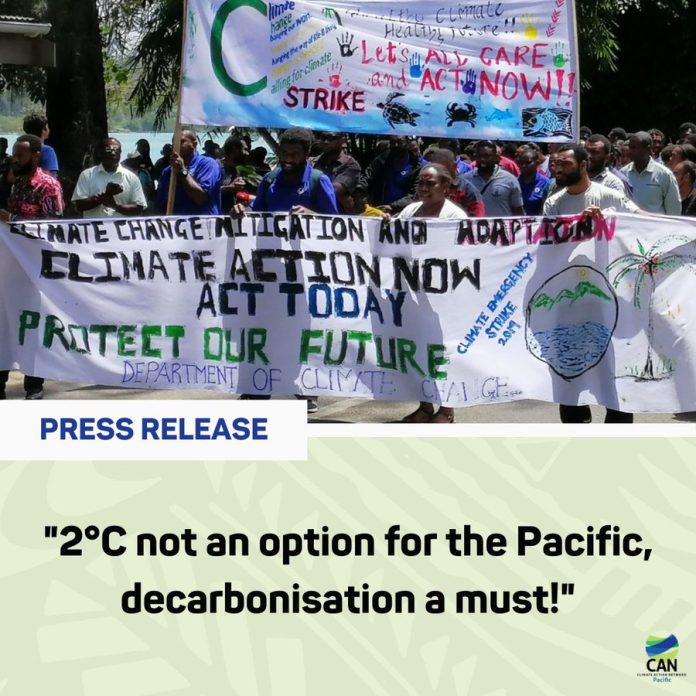 The publication of the Intergovernmental Panel on Climate Change (IPCC) Working Group III report on climate mitigation only confirms what vulnerable and marginalised communities, indigenous people and climate activists have been saying for years–we are on the brink of climate catastrophe if we do not immediately and drastically reduce fossil fuel production, terminate fossil fuel subsidies, and phase out dirty energy entirely in the very near future.

The Pacific and its people remain at the forefront of this crisis, already battling the consequences of years of climate inaction. Our urgent calls for a 1.5°C limit to warming, a threshold that will still see the Pacific endure serious loss and damage, has come to a tipping point.

Without an immediate and significant reduction in emissions across all sectors and regions, that 1.5°C goal is out of reach. If we do not strengthen mitigation efforts, greenhouse gas (GHG) emissions are projected to lead to a warming of 3.2°C, delivering an unrecognisable and unjust future for the people and communities of the Pacific Islands.

In response to the IPCC report, Lavetanalagi Seru, Regional Policy Coordinator for the Pacific Island Climate Action Network(PICAN), said: “The scientific evidence becomes more damning with each IPCC report. The IPCC report is clear about the urgency to increase the pace, depth and breadth of mitigation efforts, in order to protect vulnerable communities. Historic polluters such as the U.S, Russia, Brazil, U.K, Canada, European nations, Japan and Indonesia, including our fossil fuel addicted neighbour – Australia, need to urgently reduce their real emissions within this decade, or otherwise, they are writing a death sentence for the Pacific island nations”.

George Koran, Coordinator for the Vanuatu Climate Action Network, added: “The recent decision taken by OPEC and its allies to continue to increase fossil fuel production contradicts the urgency of mitigation approaches highlighted in this working group report. This is why the Vanuatu government is taking the initiative to pursue an Advisory Opinion from the International Court of Justice on the nexus of climate change and human rights. It is evident not just in the Pacific but across the globe that climate change is undermining the enjoyment of fundamental human rights promised to everyone”.

Noelene Nabulivou, Executive Director, DIVA for Equality, Convenor – Women Defend Commons Network, Chair – PICAN Gender and CC Working Group, added: “This is about survival chances of climate frontline communities in the face of severe loss and damage that we already face, a reality that gets worse with every half-degree rise. Industrialised countries must cut emissions immediately and drastically. Coal has to go and we are no longer talking about a just transition–this is about urgent decarbonisation.

Nabulivou also highlighted Chapter 18 of the groundbreaking cross-chapter box on ‘Gender, Climate Justice & Transformative Pathways’ of the report, as being critical to climate-just response, including a table linking to SDG5 & a regional table of gender & climate action. “We will only achieve the scale, speed and depth of change if we move urgently together on gender justice, human rights, socio-economic, ecological and climate justice, for all. We have the options. We must move!”

The publication of the final IPCC report for this sixth assessment cycle makes clear that politics and profit—not science, technology or lack of understanding—continue to be the main barrier to emissions reductions and meaningful climate action.

What is also made clear by the report is that the window of action is extremely narrow but the technology, solutions, and pathways exist to severely slash carbon emissions in the coming years and into the next century, and keep open the possibility of limiting warming by 1.5°C—a lifeline for the Pacific. There is no other way for Islander people to be safe and be able to live in the places of our ancestors, and our birth. As we have always said in the Pacific, one point five to stay alive!.

Climate summit was not a vacation says Fijian PM

Pacific Islanders: Failure to commit to 1.5 degrees at COP27 will...