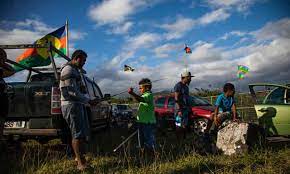 A prominent New Caledonian indigenous party has said that if France wants to have an economic and political stake in the Pacific – as China’s influence in the region rises to “omnipresence” – it needs to grant New Caledonia a fourth referendum on independence and treat the Pacific island as a partner, rather than a colony.

The calls come after a contentious referendum on independence last year which was boycotted by pro-independence parties, after they said holding a referendum during a severe Covid outbreak that disproportionately hit indigenous Kanak and Pasifika populations would not return a fair result.

“We ask for a fourth vote on self-determination,” said Charles Washetine, a spokesman for the pro-independence Palika party. “We would like this consultation to be organised by the UN’s special committee on decolonisation.”

“We are aware of the great influence of China in the region, and France’s interest in maintaining this strategic geopolitical and economic position.”

“Despite all, we are linked to France… since France seems to want to be here, lets talk and discuss it together,” he said.

“The omnipresence of China in the region poses a problem. France is using the ‘No’ of the last vote to stay. If they want to keep their economic and political influence, let’s talk as two sovereign nations and not in this unilateral way which is the continuation of the colonial power relations.”

Washetine said last year’s scrapping of a submarine deal with France by Australia – which resulted in a diplomatic rift between the two countries – had isolated France in the region. “For this reason, let us engage in discussions bilaterally and let us work to make sure that we are protecting both our interests.”

The French territory voted overwhelmingly against independence in December but turnout was low, at 43%, after pro-independence parties boycotted the vote arguing that Covid lockdown measures and traditional Kanak mourning rites made campaigning impossible.

But support for independence had grown between the last two referenda – from 43% in 2018 to 47% in 2020 – and the prospect of a breakaway had become a real possibility and source of alarm for France. More than 40% of the archipelago’s population is indigenous.

While Palika rejects any sort of integration with France as part of its vision of independence, Washetine emphasised that the party wanted to work in partnership with the country.

According to him, France’s interest in its former colony is both economic and geopolitical, with New Caledonia being an important part of the “Indo-Pacific axis”, a concept that is increasingly being touted by president Emmanuel Macron. Ninety-three per cent of France’s exclusive economic zone is located in the Indian and Pacific oceans.

Palika wants to begin negotiations on a fourth referendum after the French presidential election in April.

Loyalist parties have rejected calls for a fourth vote. “We will take into account the independence voices – we can’t advance without them and we don’t want to,” said Cristopher Gyges, director of Les Voix du Non, a coalition of pro-France parties.

But he added: “New Caledonia needs to look ahead. We want to focus now on crucial issues for the generations to come, such as employment opportunities and the environment.”

The December poll was meant to conclude a decolonisation process that started 30 years earlier. It was promised to the people of New Caledonia as part of the peace process following the “Events”, a quasi-civil war that left scores of dead in New Caledonia in the 1980s.

The agreement, called the Nouméa accord and signed in 1998, allowed long-term residents to vote on New Caledonia’s future political status and the transfer of sovereign powers over defence, foreign policy, currency, police and courts.

Washetine said the Kanak population had been rebuilding its sense of identity and belonging following the repression of its culture during colonisation.

“The sense of identity is growing, the goal of independence is still alive … Over the years, we have built a multicultural society – prisoners’ descendants of the penal colony, labour migrants, political dissidents,” he said. “We have worked to build a shared common solidarity to bring people together.

“We are the colonised population, we demand an independent nation,” he said.