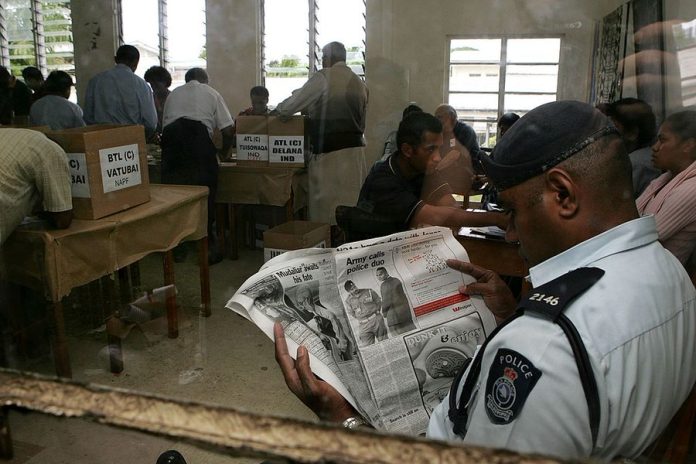 Fiji will soon vote on Frank Bainimarama, the military supremo who slowly morphed into an elected leader.

The man who has driven and dominated Fiji’s politics since 2000 had urgent heart surgery in Australia in mid-January and returned to Suva at the start of March.

The campaign period for Fiji’s general election starts on 26 April, which just happens to be the day before Bainimarama’s 68th birthday. He can call for the poll to be held between July and January, though November is most likely.

For Fiji’s democracy and for Frank, this looms as a moment of judgement.

A mark of Fiji’s strange trek over the past 35 years is that the two main political leaders are former defence chiefs who both seized power in coups. And both then took off their uniforms to become democratic leaders; I contemplated using qualifying quote marks, to call them ‘democratic’ leaders, but that would be a disservice to Fiji, if not to Rabuka and Bainirmarama.

Last week there was bizarre sparring about who did the better coup. Rabuka’s coup was racist; mine was not, claimed Bainimarama: ‘[It] was to bring to the people of Fiji an even playing field.’

Fiji is, at least, able to talk openly about the way the military has warped its politics.

These days, Freedom House calls Fiji ‘partly free’, judging that the ‘repressive climate’ that followed Bainimarama’s 2006 coup ‘has eased since democratic elections were held in 2014 and 2018. However, the ruling party frequently interferes with opposition activities, the judiciary is subject to political influence, and military and police brutality is a significant problem.’

The strength of the democratic norm in the South Pacific is demonstrated by the way Fiji keeps dragging itself back to democracy.

In that effort over the 35 years since Rabuka’s two coups in 1987, one institution has been on the front line and under constant pressure—Fiji’s media.

As a journalist, I pay tribute to the quiet heroism of Fiji’s journalists and their determined professionalism. Over decades, these wonderful hacks—many of them quite young—have faced dangers and difficulties unknown anywhere else in the region. (‘Hack’, by the way, is a badge of praise for the reporters and editors who serve the daily disciplines of the craft.)

Often, Fiji’s hacks have had to bend and bow and dodge and shade the strength of their daily effort to serve truth with the facts. But they’ve never broken or surrendered. The strength of the democracy Fiji has today is partly due to the heroism of the hacks, facing intimidation backed by the threat of jail.

The pressure was on from the start when Rabuka seized power in 1987, closing newspapers and putting a military censor into Radio Fiji.

One of the few light moments of the heavy-handed censorship came when Commonwealth leaders ejected Fiji from the Commonwealth in 1987. That news came through early in the morning and the army officer on duty couldn’t raise any of his superiors to get a ruling on how the information should be censored. He thus refused to approve or reject any copy on the Commonwealth decision.

The editors preparing Radio Fiji’s main morning bulletin came up with a one-off solution to slide by censorship guidelines. They abandoned their own bulletin, subject to censorship, and instead took a live feed of the hourly bulletin broadcast from Melbourne by Radio Australia. So, the news that Fiji had been cast out of the Commonwealth was announced to Fiji by the ABC News theme and conveyed by the ABC’s reporter at the Vancouver summit, Graham World.

In the 2000 crisis, by contrast, there was no censorship for the domestic media and no attempt by the Ministry of Information to control international reporting. Fiji’s media was one of the few institutions that grew in stature during the 56-day siege of the parliament building, when rebel special forces troops held parliamentarians hostage, including Prime Minister Mahendra Chaudhry and his ministers.

Fiji suffered two coups in 2000—one that failed and one that succeeded. The foiled coup was that of the rogue special forces troops who seized the parliament and held hostages. Fiji’s army was at war with itself, ‘hobbled by internal divisions and provincial loyalties’. To unite Fiji’s army against its own comrades in the parliament, the head of the military, Commodore Bainimarama, deposed the governor-general, Ratu Sir Kamisese Mara, proclaimed military rule and eventually installed his own pick as prime minister, completing the overthrow of Chaudhry. Later that year, Bainimarama barely managed to escape assassination by his own troops during a failed mutiny.

When, in 2006, Bainimarama threw out the prime minister he’d put in place with another coup, the regime hammer kept crunching on the hacks. Censorship was back for a time. Publishers were expelled. Journalists were threatened and harassed. Bainimarama aped some of the New Order approaches of Indonesia’s Suharto regime in deploying military officers throughout the government and tugging the leash on the media.

Under Bainimarama’s rule, journalism is still a legally fraught craft. The 2010 Media Industry Development Decree set up an authority to control the content of any Fijian media that is ‘against the public interest or order’, is ‘against the national interest’ or ‘creates communal discord’. These broadly defined offences carry fines of up to $100,000 and two years’ jail. Journalists have also been charged with sedition, with up to seven years in jail.

As Fiji journalists admit, the result is a culture of self-censorship. The reality of the legal threat was emphasised by charges of sedition against three editors and an opinion writer from the Fiji Times group; the ‘not guilty’ finding by the High Court in 2018 scored a welcome win for Fijian journalism.

The World Press Freedom Index, published by Reporters Without Borders, ranks Fiji at 55th out of 180 countries; back in 2014, the ranking was as low as 107 out of 180. The journalism group calls Fiji’s ‘vaguely-worded’ media laws ‘draconian’.

The general secretary of the Fijian Media Association, Stanley Simpson, told The Strategist that journalism still carries scars. Reporters and editors and were conscious of the need for care, he said, but today Fiji’s media had a ‘relatively free environment’.

The election task, Simpson said, is for journalists to assert themselves to provide accurate and balanced reporting and analysis: ‘The big challenge is to provide all parties with a voice, equally, and at the same time inform the people with relevant information they need to make an informed decision.’

The editor-in-chief of the Fiji Times, Fred Wesley, told The Strategist the media will have a critical role in what shapes as a critical year: ‘We all should take responsibility as journalists to rise up to the challenge to get that information, to empower people, to allow people to make informed decisions.’

Fiji’s journalists spent many years sailing close to the wind and battling turbulent tides, but they never lost sight of the star that guides the craft: to serve truth with the facts. The hacks have done much to restore Fiji’s democracy.

108 seats yet to be declared –PNG Electoral Commissioner Sinai