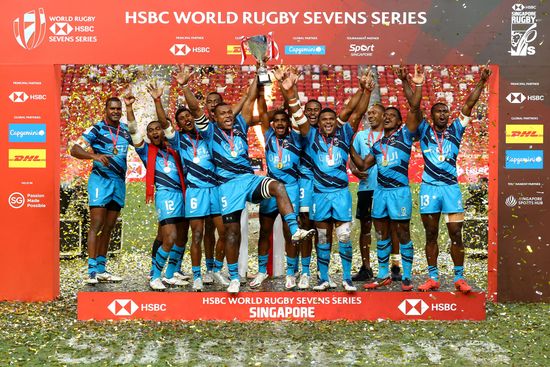 Australia beat impressive Ireland 21-19 to clinch a hard fought bronze medal and remain in contention for the 2022 Series title.

Prior to Singapore, South Africa had won all four rounds of the HSBC World Rugby Sevens Series 2022 to date – and six in total in a row – but in Singapore’s National Stadium it was to be Fiji’s moment.

The last time anyone but South Africa had won a men’s tournament on the big stage was in March 2020 in Vancouver when New Zealand took top honours.

The Blitzboks won the two events in Vancouver and Edmonton in the shortened 2021 Series and had won the first four competitions this year in Dubai (2), Malaga and Seville.

However, having seen their 36-match unbeaten run ended on Saturday evening by the USA in the pool stage, they lost again on Sunday to Fiji in the Cup quarter-finals and then to Argentina in the fifth place semi-final.

That meant that day two in Singapore was all about who would join the winners circle for 2022 – and it was to be Fiji.

Over the weekend, Fiji’s Vuiviawa Naduvalo, on debut, led the way with 10 tries and in the final they were too strong for New Zealand.

Fiji’s start to 2022 had not been so strong and they had to miss rounds three and four in Spain, but here they showed they are back in business.

Player of the Final Naduvalo said: “I am so happy, it has taken a lot of sacrifice for me to get this far and that is why I was so emotional during our national anthem. This victory is for my family, they are my ‘why’, they drive me on and I want to make them proud.”

Despite being runners-up, it was great to see New Zealand back on the Series for the first time this year – and it will be interesting to see how they build on this going forward.

In a repeat of the Olympic final from Tokyo 2020, Fiji and New Zealand met here. Fiji had won the gold medal in Japan last year after a 27-12 victory and matches between these two powerhouses are always classics.

Vuiviawa Naduvalo scored his ninth try of the weekend after two minutes to give Fiji the lead in this one with Kaminieli Rasaku converting. Waisea Nacuqu then scored – and converted – Fiji’s second try and they had a healthy 14-0 lead. Just before the break, Joseva Talacolo scored Fiji’s third try, converted by Rasaku, and it got worse for New Zealand as Leroy Carter was yellow carded.

New Zealand needed the first try in the second half to give themselves any hope and a score came from Regan Ware, but it was not converted. With Jerry Tuwai pulling the strings, Fiji’s fourth try came through Naduvalo, his 10th of an amazing two days. Rasaku converted.

A Moses Leo try – converted by Akuila Rokolisoa – and then an unconverted effort from Caleb Tangitau for New Zealand made the final score 28-17.

Fiji captain Tevita Daugunu said: “It was a very good final. We knew we had to keep the ball away from New Zealand and for most of this final we did just that.

“The team stuck to the game plan perfectly and with it being Palm Sunday back home we hope this has made our family, friends and supporters happy.”

Australia raced into a 14-0 lead in the first half, but far from their march to bronze being easy it went all the way with Ireland showing they really are one of the emerging rugby sevens nations.

Corey Toole, Ben Marr and Dietrich Roache tries – and three conversions from the latter – had Australia 21-14 up heading into the last minute, but with Nick Malouf in the sin bin, Ireland took advantage.

A great finish from Andrew Smith out wide made it 21-19, but the tough conversion attempt hit the upright and the Australians held on to take a medal from a hard fought weekend.

Corey Toole of Australia was the DHL Impact Player of the Tournament.

Cup semi-finals: Late scores from Canakaivata and Joass and Rokolisoa see Fiji and New Zealand through

If we thought we had seen drama before these games over the weekend there was even more to come here with both last four ties going right down to the wire.

In the first semi-final, scores from Australia’s Nick Malouf and Henry Hutchison and tries for Fiji from Joseva Talacolo and Vuiviawa Naduvalo – plus one conversion apiece – had the sides level at 12-12. That was until a try a minute from time from Elia Canakaivata, converted by Waisea Nacuqu, got the Fijians through the tie 19-12.

In the second semi-final, giant killers Ireland were at it again. Tries from Jordan Conroy, Terry Kennedy and Gavin Mullin, plus two conversions, had them 19-12 up against New Zealand and on the cusp of a massive shock.

That was until late unconverted tries from Trael Joass and Akuila Rokolisoa broke Irish hearts and saw New Zealand through 22-19.

In the Cup quarter-finals earlier in the day, Australia had come flying out of the blocks to see off Argentina 29-5. Corey Toole was the main man in that one with a hat-trick of tries with Matthew Gonzalez also crossing and Dietrich Roache kicking the rest of the points.

South Africa were then looking to bounce back from their day one evening loss to USA, but they could not do it as Fiji got the better of them 19-14 to really open up the tournament.

Vuiviawa Naduvalo, Joseva Talacolo and Waisea Nacuqu’s tries and two conversions from the latter gave Fiji a 19-7 lead which meant that even though the South Africans scored a converted effort late on through Siviwe Soyizwapi, they could not get back in front.

A Steve Rimoni converted try double had Samoa 14-12 up going into the last couple of minutes against New Zealand in the third last eight tie, but the latter rallied. Caleb Tangitau and Kitiona Vai went over for five pointers before the end of the game and New Zealand had scraped through 22-14 and shown great battling qualities.

USA were leading Ireland 12-7 at half-time in the fourth tie, but the Irish had taken heart from defeating Fiji on day one and a Jordan Conroy try, converted by Billy Dardis, with four minutes to go gave them a 14-12 victory.

Fifth place: Argentina turn on the style to take fifth

Argentina came out of the blocks flying in the first seven minutes – building up a 21-5 lead – to get the better of the USA eventually and grab a fifth place finish.

In the fifth place final los Pumas Sevens put in one of their best showings of the weekend with Felipe Del Mestre, Luciano Gonzalez, Tobias Wade, Agustin Fraga, German Schulz and Marcos Moneta all scoring tries in a 42-24 victory.

Dmontae Noble did score two of the USA’s four tries, but they had run out of steam on this occasion.

Earlier, in the first fifth place semi-final, tries from Gaston Revol, Agustin Fraga (2) and Marcos Moneta meant that the weekend got worse for South Africa.

The Pumas came out on top 22-15 while, in the second semi-final, Kevon Williams led the way with two tries for the USA against Samoa.

However, Samoa have a never say die attitude and it was 17-17 until the closing seconds when a Lucas Lacamp try, converted by Marcus Tupuola, got USA home 24-17.

Ninth place: France get past Spain to finish best outside of top eight

France edged out Spain to finish in ninth place. Paulin Riva, William Iraguha, Aaron Grandidier and Nisie Huyard were their try scorers in the ninth placed final, although Spain kept it close to the death thanks to tries of their own through Nicolas Nieto, Tobias Sainz-Trapaga and Jerry Surumi Davoibaravi. However, France won 24-19.

Earlier, in the ninth place semi-finals, tries from Cole Swannack, Lloyd Lewis, Morgan Williams and Callum Williams got Wales home 24-19 against England and then France turned on the style, scoring six tries in a 40-12 thumping of Canada.

Next up Spain saw off Scotland 27-10 thanks to tries from Javier De Juan, Pol Pla, Tobias Sainz-Trapaga, Nicolas Nieto and Jerry Surumi Davoibaravi.

And Herman Humwa and Billy Odhiambo were the Kenya try scorers – and Anthony Omondi kicked an important conversion – as they squeezed past Japan 12-10.

Nelson Epee was the star for France against Wales in the first ninth place semi-final, bagging a hat-trick of tries in a 38-12 triumph.

And then Eduardo Lopez, Pol Pla and Javier De Juan dotted down as Spain got the better of Kenya 19-10.

After a disappointing weekend overall, England at least ended it on a high by defeating Japan to claim 13th place. The two sides had got through to this match by earlier seeing off Canada and Scotland respectively in the semi-finals.

In the 13th place match, England led 14-7 at the interval and eventually came out on top 28-14. Will Homer, Frederick Roddick, Joe Browning and Dan Norton were their try scorers with all scores converted.

Despite losing their invincible record in Singapore, South Africa continue to lead the Series standings with 98 points from five of the nine rounds played in the 2022 Series. The Blitzboks are ahead of Australia and Argentina who are tied second on 83 points.

All roads lead to Vancouver

The women are back in action next in Langford in Canada, their fifth of six rounds of the HSBC World Rugby Sevens Series 2022, on 30 April and 01 May .