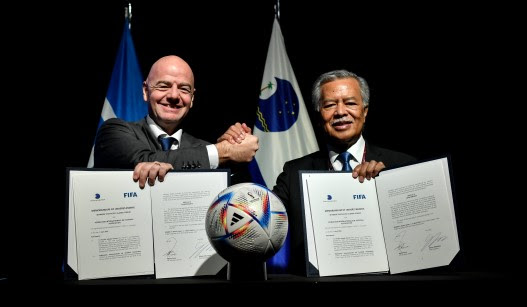 FIFA and the Pacific Islands Forum (PIF) over the weekend signed a memorandum of understanding (MoU), in the margins of the 72nd FIFA Congress in Doha, committing to working together to enhance awareness of climate change mitigation action to limit global warming to 1.5 degrees Celsius, and leverage opportunities for climate-resilient football development in the Blue Pacific region.

The partnership with the PIF, the premier political intergovernmental organisation representing 18 countries and territories in the Pacific Ocean, will focus on education around climate change and fostering disaster resilience, including helping with advocacy strategies and boost community initiatives. It will also seek to climate-proof football’s infrastructure by linking the work of the Pacific Islands Forum to FIFA Forward projects across the member associations of Oceania.

The United Nations defines small island developing states (SIDS) as a group of most vulnerable and capacity-constrained developing countries sharing similar challenges when it comes to sustainable development across all facets of life, including sports and football. That covers more than 20% of FIFA’s 211 member associations, and Oceania is at the highest risk of climate and disaster impacts, exemplified by the recent devastation in Tonga.

Speaking at the signing, FIFA President Gianni Infantino said: “This is a big day for football as the world focuses its attention on the draw for the FIFA World Cup Qatar 2022. But for all of us, in football and wider society, we are at an even more critical moment. Football is not immune to the impact of climate change, with grassroots, recreational, amateur and elite football affected all around the world.

“It is our responsibility to leverage the power and popularity of our sport to tackle this vital topic at such a critical moment in our history and we are delighted to work in partnership with the Pacific Islands Forum in a region so heavily impacted,” Mr Infantino continued. “I speak from a football perspective, as FIFA President, but also from a human point of view: as humans have induced and accelerated the rate of climate change, so we must also take action and such measures have been enshrined in FIFA’s daily business since 2016.2

Pacific Islands Forum General Secretary Henry Puna, said: “The single greatest threat facing the Pacific and our blue planet is climate change, and we must urgently raise awareness, build resilience and act now to limit global warming to 1.5°C. We see this partnership with FIFA as a chance to influence behaviour change and drive action from individuals, communities, businesses and governments across the world using the power of football. It will also help mobilise financing for resilience-building through the Pacific Resilience Facility.

“This is a historic milestone for the Pacific Islands Forum as the custodians of the world’s largest Ocean to forge a new partnership with FIFA which has a footprint in over 200 countries. This cooperation will not only enable PIF to promote its climate advocacy messages to the global community, but also demonstrates FIFA’s commitment to engaging with all regions in the world and providing input to political discussions on climate change and resilience in the Pacific.” FIFA launched a Climate Strategy in November 2021 at the UN Climate Change Conference (COP26) in Scotland and committed to net-zero carbon emissions by 2040. Back in 2016, FIFA became the first international sports organisation to join the United Nations Framework Convention ‘Climate Neutral Now’ initiative, pledging to measure, reduce and compensate the greenhouse gas emissions associated with FIFA World Cups.

The FIFA World Cup Qatar 2022™ will be fully carbon neutral and stringent and robust measures to prioritise sustainability are now part of each bidding process for future tournaments as FIFA shows an unwavering commitment to tackling the impacts of climate change.