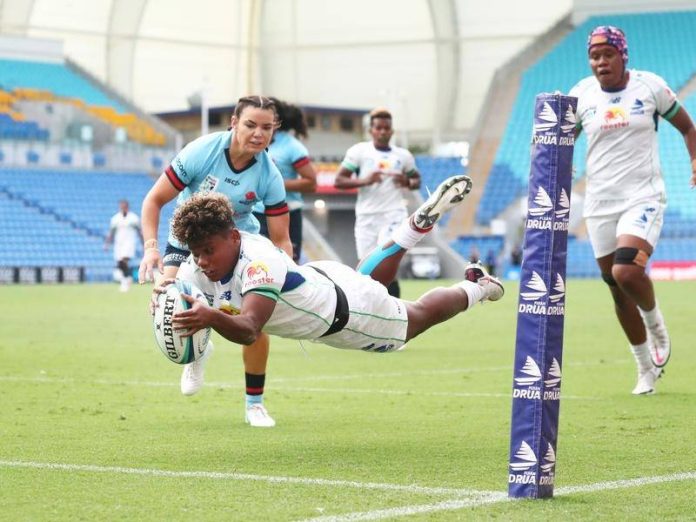 Fijiana Drua have burst the NSW Waratahs’ bubble to all but book a berth in the Super W final.

The Drua turned on the style to snap the Waratahs’ 21-match unbeaten streak with a 29-10 win in their top-of-the-table clash on the Gold Coast.

The Waratahs had never previously lost since the advent of the women’s competition in 2018 but the four-time champions had no answer to the Fijians’ attacking prowess and relentless defence.

A three-try blitz fired the Drua to a 17-0 lead inside 18 minutes at Cbus Super Stadium on Friday, with classy outside backs Vitalina Naikore, Kolora Lomani and Timaima Ravisa all finishing off long-range movements.

Winger Lori Cramer, easily the Waratahs’ best in the opening half, crossed in the 22nd minute to put the defending champions back in the game after pulling off some important defensive saves as well.

But a runaway intercept try against the run of play to Raijieli Laqeretabua when the Drua had flyhalf Merewalesi Rokouono in the sin bin left the Waratahs playing catch-up in the second half.

Tatum Bird’s third try in two games, after more great lead-up work from Cramer, gave the Waratahs a glimmer of hope of snatching a miracle draw with five minutes remaining.

It was all over, though, when lock Sereima Leweniqila bagged the Drua’s fifth try two minutes later.

Triumphant captain Bitila Tawaki was delighted that the Drua managed to preserve their unbeaten record in 2022 to go outright top of the table two weeks out from the finals.

“Really pleased for the girls with the performance,” Tawaki said.

“Thanks to the Waratahs for giving us such a good game. It wasn’t an easy game.2

Losing captain Grace Hamilton said the Waratahs were punished for trying to beat the Drua at their own game.

“It was a really tough today,” she said.

“We tried offloads, which is not our game. We’ve just got to play the platform.

“We just let them into the game and they capitalised on our mistakes.

“And credit to them – they’re good at it. They make points of every turnover,” she said.