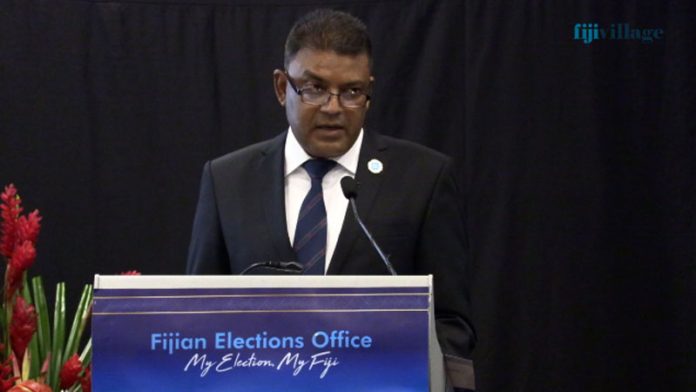 Fiji’s Electoral Commission Chair Mukesh Nand is urging all eligible voters to exercise their right by voting in the upcoming General Election.

Nand made the call in a press conference Wednesday as a decline in voters turning up to vote in the 2018 election was recorded.

“One may say that it in today’s date that it has been handed to many by a silver platter. The question is have we taken our right to vote for granted?

“Someone had struggled to ensure that you have a right to vote, so use it. Voting in Fiji has transitioned to voluntary voting, this changes the dynamic significantly.

“Before, if a person did not vote in the General Election they would have been fined and other penalties. This forced people to go out and vote.

“There were huge turnout despite there were lesser numbers of polling stations and other complications. The 2013 Constitution introduced a new election system,” he said.

He said it is encouraging to note that more women voted in the last General Election compared to men.

“The law made it a requirement that people vote in polling stations where they are assigned to rather than anywhere as like the case before.

“Another election is coming up. It is important for us to organise ourselves so we can sure that the turnout in the upcoming General Election is higher than the previous ones.”

He said the Fijian Elections Office has reached out to more than 125,000 people since they started their voter awareness drive last month.

Meanwhile, Supervisor of Election Mohammed Saneem said a total of 9576 people responded to the survey that was born from the Fijian Election Office’s 2020-2023 strategic plan.

“While voter participation in an election is dependent on many factors, there is a lack of scientific statistical data on the knowledge, views and understanding of voters,” he said.

““There are several commentaries that surface in discussions relating to participation in elections. One must keep in mind that since the introduction of voluntary voting in Fiji

“Since the introduction of voluntary voting in Fiji, the number of invalid votes has not risen above one percent in comparison to 6.4 percent in 2006.

“This survey builds on the survey that was done in 2020 to understand the voter knowledge, views and understanding of voters when it comes to elections.

“It provided an opportunity to develop familiarity with the behaviour, perceptions and aspirations of the most important stakeholder in the election,” he said.

He said the data will assist the operations and awareness team in formulating the awareness drive in terms of the reach, access and coverage.

Saneem also said he has not breached any law while carrying out consultations in the communities.

He made the comment after some politicians questioned his presence in the community during an awareness session regarding the upcoming General Election.

Saneem said as the Supervisor of Elections, he has full authority as stated under the Constitution and Electoral Act to see how best an awareness programme is conducted and runs.

“In fact, this is 2022 and as the Supervisor of Elections, I have full authority under the Constitution and Electoral Act.”

“As well as how to go out and create awareness. The idea of sitting behind the desk and looking good as the Supervisor of Elections must be an idea from the idea from the 1900s areas.

“This is certainly not the idea of todays; this kind of old style approaches to leadership is bygone,” he said.

Rabuka said it was unusual for Saneem to carry out consultation with his team in communities.

He said he should send officers in Government like those in district office to carry out consultation and campaign.

“There have been photos uploaded on the official Fijian Election Office social media page showing the Supervisor of Election carrying out consultation in communities.

He said there are people that are supposed to do this work rather than him actually going out to carry out consultation and campaign in communities.