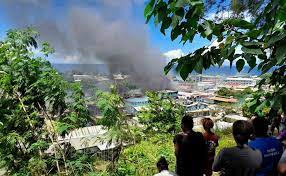 By Anna Powles and Joanne Wallis

When the draft security agreement between Solomon Islands and China landed in the news cycle on Thursday, we shared a sense of dread. Initial analysis of the agreement in the Australian media was typically narrow and, at times, downright unhelpful.

The most outlandish claim was that Australia should be prepared to ‘invade’ Solomon Islands and ‘topple its government’. Apart from being illegal and impracticable, recommendations like this undermine both Solomon Islands’ and Australia’s security. They can be used both to bolster complex domestic power struggles in Solomon Islands and to fuel narratives of Australian militarisation and neo-colonialism, undermining Canberra’s relationships in the Pacific and raising suspicions of its motives.

Other Australian media responses were more measured. But they viewed the agreement primarily through a geopolitical lens. Although the leaked draft didn’t specifically mention it, all assumed that it would inevitably lead to a Chinese ‘military base’ in Solomon Islands. And they all focused on shoring up Australian leadership in the region. Recommendations ranged from Australia building a naval base in Solomon Islands to pursuing a regionwide agreement to ban non-resident powers from basing or deploying military personnel in the Pacific region. Other suggestions included expanding access to the seasonal worker program and increasing educational scholarships.

Largely missing were nuanced analyses that acknowledged the primacy of domestic Solomon Islands politics and the complexity of its geopolitical relationships. This was mostly because few Solomon Islander voices were heard in the initial Australian media storm.

Australian understandings of the Pacific will always be partial unless more space is provided for Pacific voices to participate in robust and nuanced public—and private—debate.

This suggests an urgent need for opportunities for deepening mutual understanding, building relationships and elevating the profiles of Pacific thinkers in Australia and elsewhere. Creating opportunities for Australians and their Pacific counterparts to engage in private discussion is essential to widening and deepening knowledge and relationships.

Track 1.5 dialogues offer one (although not the only) way to provide these opportunities.

Track 1.5 dialogues are informal conversations that include government officials and non-governmental experts all sitting around the same table. In Asia, they are an accepted—and, in the case of the annual Shangri-La Dialogue defence summit, institutionalised—part of the region’s multilateral framework.

But track 1.5 security dialogues comprising Australian, New Zealand and Pacific island officials and non-governmental experts are underutilised. This is despite the fact that they could provide critical opportunities for open and frank closed-door conversations to deepen understanding of the issues at stake and the perspectives of other actors.

We frequently participate in track 1.5 regional security dialogues with Australia’s and New Zealand’s major partners at which Pacific issues are discussed. They are rich and valuable experiences. But Pacific participants are seldom involved. Notably, when Australia asked China to revive a dialogue on the Pacific earlier this month, the proposal didn’t include participation by any Pacific state.

One notable exception was in 2020, when one of us co-hosted the Track 1.5 Pacific Security Dialogue held to inform the Australia–New Zealand–United States Pacific Security Cooperation Dialogue. It was deliberately set up to ensure that the majority of speakers and participants were from the Pacific, which was partly enabled by its being held online due to Covid-19 travel restrictions.

Post-dialogue feedback reflected the value of providing a platform for Pacific voices. Participants appreciated the opportunity to hear from, and exchange views with, Pacific participants. Australian, New Zealand and American participants commented that they hadn’t been aware of the depth of Pacific expertise before the dialogue.

There are several contexts in which track 1.5 dialogues could be held in the Pacific.

Universities could be engaged to facilitate dialogues. For example, later this year, funded by a Defence strategic policy grant, our universities and the Australian National University will host a track 1.5 dialogue between Australian, New Zealand, American, Japanese and Pacific officials and academics on enhancing security cooperation in the Pacific.

In the region, the Pacific Islands Forum has considerable convening authority and could partner with, for example, the University of the South Pacific. The forum’s draft 2050 strategy for the Blue Pacific, which aims to design an effective regional architecture to respond to security and political challenges, provides the imperative. Establishing a Suva dialogue, for example, would embed multitrack diplomacy in both regional security practice and architecture.

Institutionalising a programme of track 1.5 dialogues between officials and non-government experts from Australia, New Zealand, other partners and the Pacific would build understanding of the region, enhance relationships, deepen trust and provide a platform for Pacific voices and perspectives. It would provide a forum for uncomfortable conversations and for solutions to be offered to the challenges facing the Pacific and its partners. It would require genuine investment and commitment.

The ‘success’ of these dialogues would probably be difficult to define or identify in the short term. Dialogues don’t carry the same weight at the ballot box or catch as much media attention as rumours of military bases, but the dividends of track 1.5 diplomacy—such as open communication during times of crisis—would be invaluable.