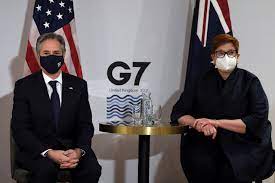 Australia has partnered with Japan and the U.S to help improve internet access in three Pacific island nations in efforts to counter China’s influence in the region.

The partnership will build a new undersea cable to give Kiribati, Nauru and the Federated States of Micronesia faster and more reliable internet connections.

Australia’s efforts to help build critical infrastructure in the Pacific has been increasing. There will be more cooperation between Australia and other like-minded countries in the future to help provide vital services in the region without the burden of debts from loans backed by China.

“This is more than an infrastructure investment. It represents an enduring partnership to deliver practical and meaningful solutions at a time of unprecedented economic and strategic challenges in our region,” the statement said.

“This six-country collaboration highlights our commitment to work together on critical telecommunications infrastructure and contribute to reliable and secure internet for the region.”

The partnership comes after a Chinese-backed bid to lay the undersea telecommunications cable was sunk in June after the U.S warned the involvement of a Chinese company posed a security threat.

The statement, from the presidents of the three Micronesian countries, Japan’s foreign minister and the U.S Secretary of State, said the partnership demonstrated the nations involved were committed to “transparent, fiscally sustainable, catalytic infrastructure partnerships with, and between, Pacific nations”. It added that the partnerships meet genuine needs and respect sovereignty.

Over the last decade, China has loaned hundreds of millions of dollars to Pacific nations for various projects, including for mobile phone networks.

In response, Australia has been increasing investment and partnerships, committing $300 million (US$215 million) earlier this year for infrastructure projects across the region including in telecommunications, health and transport projects to help countries recover from the COVID-19 pandemic.

The Kiribati government could be about to allow China a military footing on the doorstep of the United States.

Senator Payne has been in Britain for the G7 foreign and development ministers’ meeting, which also included attendees from other Associate of Southeast Asian Nations countries. Growth and security in the Indo-Pacific was a key focus of the meeting, as well as equitable vaccine access.

At the summit, Senator Payne and U.S Secretary of State Antony Blinken held a bilateral meeting to discuss the region. Senator Blinken said it had been a “terrific year” for work between Australia and the U.S, including the AUKUS agreement as well as an “extremely important concentration and coordination on a whole series of issues”.

The meeting covered several topics, including the importance of working with regional partners on projects like the Micronesian sea cable, working together to counter economic coercion, and cooperating to support stability in the Taiwan Strait.

Senator Payne said the U.S was a critical partner on several fronts, and the country’s engagement with the region was also valued by Japan and India.

“We have achieved a great deal in 2021, whether it is the announcement of AUKUS, a really important trilateral partnership that Australia has with the United States and the United Kingdom and the outcomes of our first Quad leaders meeting in person,” she said.

“They are now cemented into our future, whether it is the Quad, whether it is AUKUS. And the concrete that is the Australia-U.S alliance for us underpins all of that effort,” She said.