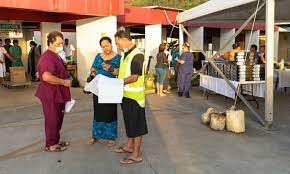 Covid outbreaks in Samoa and Vanuatu have further whittled down the number of Pacific island nations that have so far escaped the pandemic, as case numbers surge after the first instances of community transmission in both countries.

Tuvalu, Nauru and Micronesia are now the only remaining Pacific island countries that have not recorded any cases of the virus, according to the World Health Organisation.

Samoa recorded its first case of community transmission last week, when an American missionary tested positive in preparation for a flight out. The country reported another 155 new cases on Wednesday bringing the total in the current outbreak to 622, with experts suggesting the virus had likely been spreading before the first case was detected.

The country has closed its borders and gone into lockdown, shutting down schools and banning public gatherings.

In Vanuatu, where the first case of community transmission was reported earlier this month, cases have spiked in the past week with 279 reported on Wednesday alone, bringing the total number since the beginning of the year 1,373. The country is now at its highest alert level, with restrictions on movement and mandatory mask wearing in public.

Public health expert and Dean Pacific at the University of Auckland, Dr Colin Tukuitonga, said the Covid surge did not come as a surprise.

“This is not unexpected, given the Omicron spread, but it’s good that most Pacific islands have been able to vaccinate people, thus containing the spread.”

Vaccination rates vary widely among Pacific nations with some, such as Samoa where 66% of the total population is vaccinated, having relatively high levels of coverage. Others, such as Vanuatu and Solomon Islands, have much lower rates, at 28% and 17% respectively, according to the WHO.

The acting director-general of health in Samoa, Tagaloa Dr Robert Thomsen, told the media that the health system was prepared for an influx of cases.

“In the event that our current capacity is exhausted, the ministry will activate its contingency plan, and we have already identified halls and certain school buildings for a possible overflow,” he said.

Tagaloa told the media that two specialist engineers are in quarantine in Samoa to work on establishing a new oxygen plant.

“Our current capacity is between 20 and 30 tanks a day, however, this new plant will allow us to fill up to 100 or even more in a day.”

“Samoa will be prepared for the outbreak in terms of oxygen,” Tagaloa said.

Although the WHO has not registered any Covid deaths in Samoa or Vanuatu, the Vanuatu Daily Post reported that a woman in South Santo who had underlying conditions and tested positive for Covid, died last week.

Dr Tukuitonga, who has supported Pacific governments in health policies for many years, said there were cultural dimensions behind the outbreaks.

“Communal living and social interactions and big families are normally good for cohesion but increases risks of spread.”

He said that substandard housing and high prevalence of co-morbidities such as diabetes are additional factors.

The recent surge in cases has caused panic across the Pacific as outbreaks have hit small island states previously untouched by the pandemic, and left them bracing for long lockdown periods as well as putting strain on already fragile public health systems.

Kiribati recorded its first Covid death in January with the death toll now at 13 and the total number of positive cases at 3,057, according to the WHO.

Palau has recorded almost 4,000 cases and six deaths since the start of the year. Solomon Islands, which also reported its first case of community transmission in January, has the highest number of Covid deaths at 128 with a total case count of 10,204.

In Tonga, which had been Covid-free until the virus arrived with relief efforts following January’s volcanic eruption and tsunami, cases have reached 3,784, with just over 1,700 reported in the last seven days.