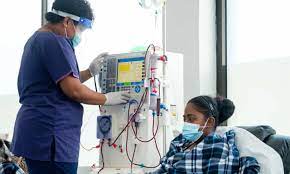 Ten years ago, at the age of 21, Sashi Kumari was admitted to hospital and told her kidneys were failing.

She was diagnosed with end-stage kidney disease (ESKD), which requires four-hour dialysis twice every week and ultimately a kidney transplant.

“I was very scared in the early stages of my diagnosis,” she said. “I thought about my family, my daughter and the financial burden.”

In the decade since, Kumari, who lives in Nadi in the west of Fiji’s main island, has spent thousands of hours in treatment and tens of thousands of dollars paying for it.

She now faces the burden of raising more than FJ$40,000 (US$19,000) for a kidney transplant overseas, a prohibitively expensive cost in a country where GDP per capita is less than US$5,000.

“Right now, there’s no timeframe on when I’d go to India because I still have some more funds to raise for this,” Kumari said.

Kidney specialists in the country suggest that more than 190,000 Fijians – roughly 20% of the population – were likely to be at risk of developing some form of kidney disease. Each year, at least 840 people are diagnosed with ESKD in Fiji and roughly 550 people die from it, with 40% dying within six months of their diagnosis.

A huge factor in this mortality rate is the difficulties people face in accessing treatment.

Kidney transplants are not possible in Fiji, and so people who require them, and most with ESKD eventually will, have to travel abroad, often to India, for the procedure, paying tens of thousands of dollars for travel, the surgery, accommodation and other expenses.

‘I was scared for my life’

Unless people are very wealthy, fundraising is one of the only options available to them. A search of popular crowdfunding platforms throws up dozens of pages of Fijians desperately seeking funding for a trip to receive a kidney transplant, or even just the funds to pay for life-saving dialysis.

Salaseini Wainiveikoso, 25, from the province of Tailevu, is one of them. She needs a kidney transplant and is looking to travel to India to get one, but needs at least FJ$60,000 (US$28,500) to cover the costs.

“I found out that my kidney function was at 3%,” said Wainiveikoso, who was diagnosed in 2018. “The first thing I could think of was that I was going to die. I was scared for my life. I didn’t know anything at all about kidney failure until I knew that I had kidney failure.”

The cost of her thrice-weekly dialysis sessions has already stretched her family past their financial limit and forced them to look to GoFundMe for help.

“The financial cost is definitely stressful, even depressing at times. I dread going for treatments but at the same time I need it.”

The financial pressure eased a little when Wainiveikoso started receiving a new government subsidy in November.

Last July, the Fijian government announced the allocation of FJD$1.5m (US$703,000) to subsidise kidney dialysis treatment to the tune of FJ$150 (US$70) per session.

At private facilities, the gap fee is about FJ$50 (US$25) a session, whereas at government facilities patients do not pay anything.

‘I had no resources and that just crushed me’

But even with the subsidy, access to treatment is limited by lack of resources, says local nephrologist, Dr Amrish Krishnan, one of just three registered nephrologists in the country, with limited dialysis spots and staff to administer treatment.

To help remedy this, in December, he opened the Kidney Hub speciality hospital in Nadi.

For Krishnan the desire to start a kidney hospital came from the despair he felt as a young doctor when dialysis was even harder to access than it is now.

“For many years I had seen patients suffering from kidney failure because they were not able to access treatment. When I returned to Fiji after completing my master’s training in New Zealand in 2015, I had broken the news of kidney failure to the parents of a 14-year-old patient,” he said.

“Not having the means to provide dialysis, I had no resources and that just crushed me. I would cry with them, often privately. I just couldn’t accept it.”

While the centre increases the number of beds available for patients, treatment at the private hospital is still too expensive for some. Krishnan said this was because of the high costs, adding that the hospital helped patients organise fundraising drives to get enough for a kidney transplant abroad.

Dr James Fong, the permanent secretary of the ministry of health, said the Fijian government also supported people to fundraise for treatment by providing medical reports to assist patients in getting official permits to raise funds from the public.

Fong said the ministry also focused heavily on the prevention of ESKD, as the overwhelming majority of cases of kidney disease and ESKD in Fiji were a complication of non-communicable diseases like diabetes and hypertension.

Wainiveikoso agrees that prevention is key.

“My advice through this journey is for people not to take anything for granted. Appreciate what you have and eat right. I used to skip meals and eat junk food. Don’t do that,” she said.

“I think staying positive is very important. You don’t really appreciate what you have until it’s gone or gets taken away from you, said Wainiveikoso.