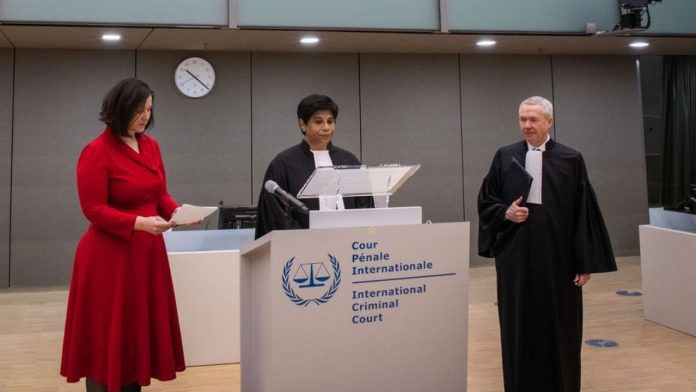 The Fijian Government has congratulated Fiji’s former Permanent Representative to the United Nations Office and former President of the United Nations Human Rights Council, Ambassador Nazhat Shameem Khan, who was sworn in as a new Deputy Prosecutor of the International Criminal Court (ICC) on Monday at the Seat of the Court in The Hague, The Netherlands.

In a historic moment for Fiji, Ambassador Khan is the first female in the Asia-Pacific region to be appointed to the distinguished role at the renowned ICC, which is the world’s first permanent international criminal court.

On behalf of the Prime Minister, Josaia Voreqe Bainimarama, the Permanent Secretary of the Office of the Prime Minister and Foreign Affairs, Yogesh Karan extended the Fijian Government’s and the people of Fiji’s best wishes and warmest congratulations to Ambassador Khan as she assumes her new role at the ICC.

PS Karan conveyed the Fijian Government’s appreciation to Ambassador Khan for her exemplary leadership at the UN Human Rights Council (UNHRC) and her impressive contributions to Fiji’s foreign services and diplomacy at the global, regional, and national fronts.

He expressed his confidence that Ambassador Khan, in her new assignment, will fly high Fiji’s noble banner blue and that her achievement is an inspiration and recognition of all our girls and women in Fiji and around the world based on the great potential they have to excel into distinctive leadership roles.

PS Karan said Fiji is confident that Ambassador Khan will carry out her new role with a great sense of commitment to make every Fijian proud.

He affirmed Fiji’s continued support to Ambassador Khan as she assumes her nine-year term at the ICC on 07 March 2022.

In response, Ambassador Khan thanked Prime Minister Bainimarama for his unwavering support and commended the Fijian Government’s strong commitment to empowering girls and women in Fiji.

“Today, I embark on one of the most important journeys in my career, and as a daughter of Fiji, I feel especially proud, because I believe that holding such a post can be an inspiration to the girls and women of my country and my region.”

The ICC Deputy Prosecutor said she looks forward to her new role, which is going to be a challenging, yet most exciting experience.

“Today is a day of great importance not just for me, but also for the people of Fiji and for the Pacific region. For the last eight years, I have served as Permanent Representative of Fiji to the United Nations in Geneva and as Fiji’s Ambassador to Switzerland. The focus of Fiji has been human rights and strengthening multilateralism for small island states and the Pacific region, in Geneva.

“In the Human Rights Council, at which I was honoured to serve as President in 2021, I participated in conversations which stressed the need for building a global community based on the values of human dignity, respect, equality, and accountability for human rights violations. I believe that despite the differing views amongst countries on the focus and role of the Council, there has always been a shared determination to ensure the relevance of the Council. If we do not strengthen multilateral institutions and dialogue based on respect for humanity, our future generations will judge us harshly.”

Ambassador Khan said she is proud to take the position of Deputy Prosecutor of the International Criminal Court because she believes that the same values underpin the ICC.

“The belief in accountability through a code of international criminal law, the emphasis on complementarity which seeks to strengthen national judicial institutions thereby ensuring the eradication of gaps created by national laws and practices in relation to crimes against humanity, and the amalgamation of different legal systems in the practice of criminal law here at the ICC, in my view, represent the strengths of multilateralism, of the values we all hold dear, and our determination that those responsible for the worst crimes against humanity, should be held to account for them.”

“I have served, previously, in my own country, as a prosecutor and as a judge. But I have never embarked on such an important journey as I embark on today. I look forward to working with the teams at the Office of the Prosecutor, with my colleague and fellow Deputy Prosecutor, Judge Mandiaye Niang, and under the leadership of the Chief Prosecutor, Karim Khan.”

“I am honoured to serve as a member of such a strong and experienced team, and I undertake to serve the Office of the Prosecutor at the International Criminal Court with diligence and integrity. I commit to treating all those I work with, with dignity, equality, and respect.”

She also acknowledged her family, especially her parents, her children Siffat and Khizer Hayaat Khan, her husband Aslam Khan, the CDA of the Geneva Mission of Fiji, Anare Leweniqila, the Ministry of Foreign Affairs of Fiji, and the community of Pacific Island countries for their support.

The former Fijian criminal prosecutor and High Court judge said it has been an honour and a privilege to serve her country as an Ambassador in Geneva and to help set in place many legal and policy reforms concerning the international institutions based in Geneva. Her time with the Ministry of Foreign Affairs of Fiji had equipped Ambassador Khan with the necessary expertise and skill that she will continue to use throughout her career and in this new role.

At the Solemn Undertaking, the ICC Chief Prosecutor, Karim Khan (QC), thanked the Assembly of State Parties for the trust they showed in electing and authorising two deputy prosecutors.

He said that Nazhat Shameem Khan has broken every glass ceiling there is.

“The first female Director of Public Prosecutions in Fiji, the first female High Court Judge in Fiji, and Ambassador for many years, and the first Fijian President of the Human Rights Council. She is also the first elected official in the Office of the Prosecutor from the Asia and the Pacific region.”