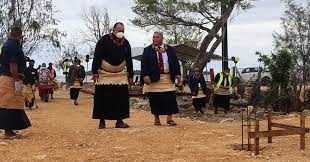 Tongan families who lost their houses in the tsunamis on 15 January will be assisted by government to rebuild homes.

A groundbreaking ceremony to start the “Hunga Tonga-Hunga Ha’apai Volcanic Eruption Tsunami Recovery Project” was held on Monday at Patangata and Sopu on the coast of the capital.

The first phase of rebuilding will include five houses, three in Patangata and one each in Sopu and ‘Ahau (in Hihifo, the western district).

The Prime Minister’s Office stated that the Ministry of Infrastructure will coordinate the construction of 468 houses that were damaged, with 286 houses that will need to be rebuilt, while 182 were damaged. This includes 157 houses in Tongatapu, 36 in ‘Eua and 93 in Ha’apai.

There was an estimated $34 million (US$15 million) damage to residential houses during the disaster and the government stated that it is focused on ‘building it better’.

Government is offering options for home owners, with the first option being the building of a 56.16 sq. metres house, which includes the sitting room, bedroom, toilet and bathroom, foyer and water tanks, with connection to power and water supplies.

The second option is a 69.12 sq. metres house, built on 2.2m poles suitable for those living in low-lying areas that are prone to flooding and water inundation during high tides or cyclones.

The third option is for families who need a bigger house to build and finance by themselves, while government assists with portions of financing the construction.

Meanwhile, the Ministry of Infrastructure stated that it is continuing with the clearing of debris, repairs to the foreshores, beaches, roads, wharves and jetty, bridges, government offices and assisting with community halls needing assistance as part of the recovery work.