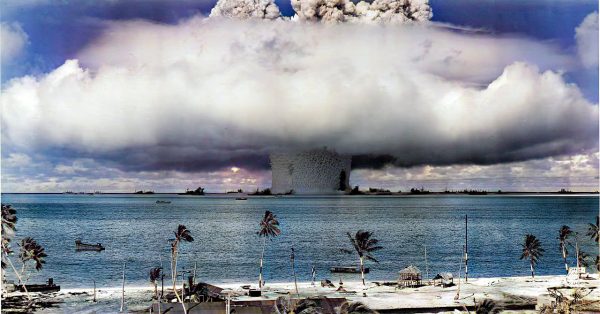 The resolution reaffirms the relationships between the United States, the Republic of the Marshall Islands and Palau, and the Federated States of Micronesia, with whom the United States is currently negotiating to extend key international agreements that allow the U.S to control land, air, and maritime access in the Indo-Pacific region.

“Orange County is fortunate to be enriched by one of the oldest Marshallese American communities, but the reason the Marshallese came to the United States remains one of the darkest chapters in our history,” said Congresswoman Porter, Chair of the House Natural Resources Subcommittee on Oversight & Investigations.

“Our government used the Marshallese as guinea pigs to study the effects of radiation and turned ancestral islands into dumping grounds for nuclear waste. By finally taking responsibility for the harm we caused, the United States can send a powerful signal in the region and around the world that we honor our responsibilities and are committed to the Indo-Pacific region.”

The United States conducted 67 atmospheric nuclear weapons tests in the Marshall Islands from 1946 to 1958 while the U.S was responsible for the welfare of the Marshallese people. These tests had an explosive yield equivalent to roughly 1.7 Hiroshima-sized bombs every day for 12 years. The most powerful test took place on 01 March, 1954, when the United States detonated a hydrogen bomb over Bikini Atoll. The damage and displacement from these tests in part drove Marshallese migration to the United States, including to Orange County.

The United States is currently negotiating to extend its Compacts of Free Association with the Republic of the Marshall Islands, as well as the Republic of Palau and the Federated States of Micronesia. These agreements give the United States control over an area of the Pacific Ocean the size of the continental United States, stretching from Hawaii to the Philippines, in exchange for modest economic assistance and access to certain federal programmes.

Congresswoman Porter has fought for the appointment of a presidential envoy to lead talks to extend the Compacts of Free Association, which have been bogged down for more than a year, in part due to the legacy of U.S nuclear testing.

“The United States’ nuclear testing programme in the Pacific led to long-lasting harms to the people of the Marshall Islands,” said Senator Hirono, Chair of the Senate Energy and Natural Resources Subcommittee on Energy.

“The 67 nuclear devices detonated by the United States contaminated their land, led to their displacement and continued health impacts. This apology calls attention to what we did to the Marshallese and raises awareness about the need to do more to undo this harm.”

“A formal apology is long overdue to the Republic of the Marshall Islands for the harmful legacy of U.S nuclear testing,” said Senator Markey, Chairman of the East Asia and Pacific Subcommittee.

“The United States used the Marshall Islands as a proving ground to test highly lethal nuclear weapon designs equivalent to the explosive power of 1.6 Hiroshimas every day for 12 years—exposing Marshallese and U.S veterans to harmful radiation. This resolution calls on the United States to prioritize nuclear justice in its negotiations with the Marshall Islands on an extended Compact of Free Association and to help Marshallese battle the existential threat of the climate crisis.”

The resolution is co-sponsored in the House by Rep. Judy Chu (D-CA), Chair of the Congressional Asian Pacific American Caucus; Rep. Dina Titus (D-NV), a member of the House Foreign Affairs Committee Subcommittee on Asia, the Pacific, Central Asia, and Nonproliferation and an expert on the U.S Cold War nuclear weapons testing program; and Rep. Amata Radewagen (R-AS), a member of the House Natural Resources Committee and the most senior Republican elected federal office holder of Asian Pacific heritage.

“As the 76th anniversary of the nuclear tests that were conducted in the Republic of the Marshall Islands (RMI) approaches and the swells of the rising sea level continue to pound against the already deteriorating coast lines of our islands, we are reminded of the resilience and resolve within our people as they seek sustainability,” said Kelani Silk, founder and executive director of Marshallese Youth of Orange County.

“We thank Congresswoman Porter and the many others that continue to echo the importance of the Compacts of Free Association, which have allowed for the continuance of reciprocal relations between the U.S and RMI as we work towards the healing of the thousands of RMI citizens that have been displaced and have fallen under the category of the marginalised within the already marginalised, brought on by the nuclear legacy and climate change.”

“The Compacts of Free Association are an opportunity to cement the United States as the partner of choice in the Indo-Pacific region, and for President Biden to affirm the foreign policy priorities he ran on, including affirming alliances, countering China, and combating climate change,” said Former Undersecretary of State for Arms Control and International Security, Rose Gottemoeller.

“As someone who has spent my career trying to address the risks of nuclear weapons and prevent the horrible consequences of their use, I believe this resolution is long overdue, and I applaud Congresswoman Porter, Senator Hirono, and Senator Markey for their leadership.”

“The people of the Marshall Islands have shown remarkable strength and resiliency in the face of both nuclear and climate injustices. This resolution is a long overdue apology for the harms caused by U.S nuclear weapons testing in the Marshall Islands, which exposed civilians to deadly radioactive fallout and contaminated their islands for generations,” said Dr Tara Drozdenko, Director of the Global Security Programme at the Union of Concerned Scientists.

“We appreciate the work of Senators Markey and Hirono and Representative Porter to highlight the historic wrongs in the Marshall Islands, and the United States’ role in it. It does not take a conflict for nuclear weapons to cause irreparable harm. We appreciate that this resolution points out the human cost of our legacy of nuclear testing.”

A proud member of the Congressional Asian Pacific American Caucus, Congresswoman Porter is dedicated to promoting the well-being of Orange County’s AAPI community. She has repeatedly urged her colleagues on both sides of the aisle to pursue justice on behalf of the Marshallese burdened by the nuclear legacy of the United States. In June, she secured legislative language directing the Department of Energy to increase radiological monitoring and community engagement in the Marshall Islands.