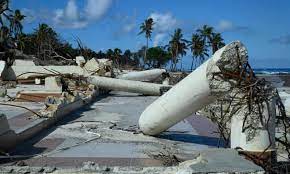 When the Ha’atafu beach resort was levelled by the tsunami that hit Tonga last month, it was the third time that the family-run business had been completely destroyed by a natural disaster.

In 1982, the resort was wiped out by Cyclone Isaac and 11 years later by Cyclone Kina.

Back then, the resort was run by Australian Steve Burling and his Tongan wife, Sesika. Now their daughter Moana Paea, and her husband, Hola, have taken over its running.

“My only memory of Kina is arriving back to Tonga to no home. My dad started building the place while living in a tent,” said Paea.

After the second wipeout, Paea’s father rebuilt the resort inland with more cyclone-resilience measures, including trees being planted all over the property.

“This [has] proven a great strategy for us as we withstood some great big cyclones over those 28 years, especially Cyclone Harold which wiped out the west coast two years ago. We only had minor damages then.”

But the resort has never had to stand up to a tsunami before.

When the Hunga Tonga-Hunga Ha’apai volcano erupted on 15 January, triggering a tsunami, Paea’s business was one of seven resorts to be wiped out on the western side of Tongatapu, the Pacific nation’s main island.

“With a tsunami, it just comes and it takes everything. You’re never prepared,” says Paea.

The disaster killed four people and caused US$90.4m (TOP 208M) in damages to Tonga, according to the World Bank, equivalent to 18.5% of Tonga’s GDP. Residents of three of the worst affected islands who lost their homes have been relocated to the main island of Tongatapu. The fibre optic cable connecting Tonga to the world was broken and was only repaired this week, leaving Tonga with an internet blackout for more than a month.

On the day the volcano erupted, the resort had a catering commitment as well as a function and the usual dinner for guests in the evening.

Paea, the head chef, and her four kitchen hands had their heads down. At 5.15pm, one of her staff glanced up and saw the sea.

“That’s when I looked up and saw the stack of waves coming in.”

Paea and Hola ran to the ocean, screaming at people to get out of the water. One family of guests was asleep and she had to wake them; others were taking photos of the ocean.

By the time the last guests left the beach, the waves were already on their property.

Paea’s staff and her six family members ran through the bushes in search of a big rock that they had previously decided to go to in case of a tsunami.

They couldn’t find it and instead found a mango tree, which they climbed and clung to as the waves washed around them.

“While we were running for the mango tree, that’s when the first bang happened. The pressure was huge. We all fell on the ground because we felt like it was an explosion. We got up and kept on running.

“We could just hear the rumbling of the waves. To me, it felt like the waves were right behind us.”

When the waves subsided, a friend was able to pick them up and drive them inland. They climbed on top of the concrete roof of an unfinished building, along with a handful of other villagers.

“When we stood on that roof, that’s when we looked across [to the capital] Nuku’alofa and saw how the swell had ripped around. By then it had started raining rocks with black ash.

“While we were standing there, the sound of the waves crashing in was so loud. You just knew that the waves were wrecking our homes.

“The reality for me was we didn’t even know whether we would make it. We would just be gone. I just thought this is it for us … We just broke into prayer. Singing hymns and praying.”

They learned the next day that they left just before the waves washed out the road and the village of Kanokupolu, where their resort and home was.

“The next day we went to check on our property and you know that rock, all the debris was on top of it.

“Hola said: ‘That’s the rock that you were looking for. You would’ve been gone if you had climbed up that rock.’ The fact that we didn’t see the rock was our saving grace.”

Rebuilding in Tonga has been complicated by the fact that a week after the tsunami Tonga, which had until that point recorded only a single case of Covid during the entire pandemic, was hit by an outbreak of the virus. Strict lockdowns were imposed, and Tonga seems to have contained it, with just under 300 cases reported.

But for the Paea family, who have been staying with a friend since the tsunami destroyed their home, lockdown has been a blessing in disguise.

“It has made us stop and rest. Otherwise we would [have] carried on with planting trees and moving forward.

“After the tsunami we didn’t cry much with losing everything … Our kids, especially our 11-year-old, had cried missing our home. So the lockdown had given us time to grieve.”

Now that the lockdown has eased, the family will start rebuilding.

“We know how to prepare for cyclones, but now with the tsunami, we have to be strategic on what we build and where.

“One thing we know for sure, God is with us. He provided a way for us to escape safely … He will provide a way again.

“We’re not quitters. Just because we go through some hardship doesn’t mean we quit. We just keep going.”

Pacific workers face deportation despite probe into their employer