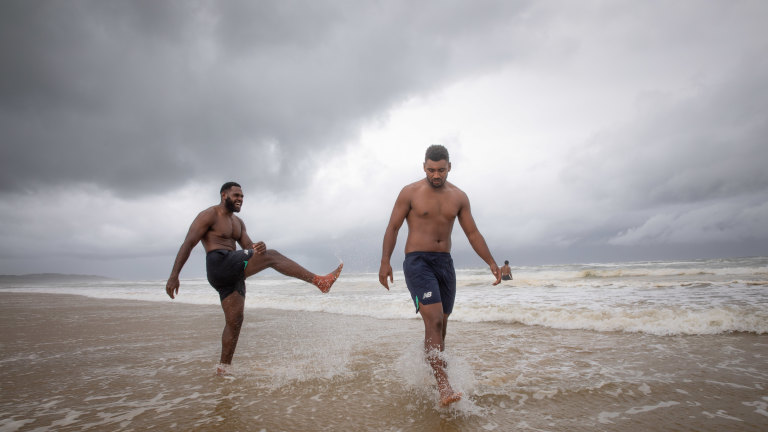 A Fijian village has sprung up on the NSW far north coast. On a sliver of land flanked by Lake Ainsworth on one side and the Pacific Ocean on the other, its Sigatoka meets Lennox Head.

There’s a cluster of timber cabins on your left, with towels and t-shirts, slung over railings, push bikes left where their riders disembarked and a Fijian flag staked through some slats. Salt hangs in the air. It’s hot.

If it wasn’t for the occasional snake slithering across the bush track to the beach, you could expect to stumble out on to the famed Sigatoka sand dunes, to which every Fijian rugby team makes a gruelling pre-season pilgrimage.

Approach the cabins and a booming voice extends the Fijian greeting, “Bula”, with the emphasis on the first syllable, signalling the speaker’s curiosity. They want to know what you’re doing here. We are 2500 kilometres from the Coral Coast but this is their turf, the temporary home of the Fijian Drua, the island nation’s first professional rugby team and what many say is the missing link between Fiji’s prolific talent pool and the aspirations of its Test side.

“It’s the blessing and the curse of Fiji rugby. You can pick up a touch rugby game on the street and you’ll find potential players,” says Simon Raiwalui, a former Flying Fijians captain who is now head of high performance for the Fiji Rugby Union.

“It’s more than a sport in Fiji, it’s part of the culture and it’s getting even more popular with the success of the sevens teams, while the women’s game is growing quickly too. There is always going to be a player drain to Europe, especially of that top-end talent. But the Drua will give us 40 opportunities that weren’t there before to recruit the top of the class.”

Raiwalui, who grew up in Tempe with a Fijian father and Kiwi mother, was one of the first Fijians to make his name in the United Kingdom, signing with Sale Sharks in 1997 at the dawn of rugby’s professional era. He thought he’d made it with a contract worth £40,000 per season, until he pitched up in Manchester with his wife and baby in tow, and started shelling £1000 a month away in rent for the privilege of playing in the English winter. They dug in, though. Raiwalui played and coached in Wales, England and France over the next two decades and was capped 43 times for Fiji.

In the same period, the flow of Fijian players to Europe has increased to warp speed. According to Dan Leo, Samoan international, filmmaker and recently departed head of the Pacific Rugby Players Welfare Association, there are more than 150 players of Fijian descent playing in Europe. What’s changed is that as well as professional leagues in the UK and France, rugby players can now earn a living in Georgia, Spain, Romania, the United States and even Poland, too.

That, and the money. The best command is some of the biggest paycheques in the game. Semi Radradra at Bristol and Virimi Vakatawa and Josua Tuisova at Lyon. Australia’s own Samu Kerevi. Vakatawa is on a reported $1.5 million per season in France. Unlike Tuisova and Radradra, who both played for Fiji at the 2019 World Cup, Vakatawa has played 30 Tests for France.

How did that happen? He was a teenager when he moved to French club Racing 92, plucked from the highland province of Naitasiri by another Fijian trailblazer, Sereli Bobo, and mentored by Raiwalui, who coached at Racing at the time. More than a decade on, the explosive centre is the ultimate Fijian success story, a master of both the XVs and sevens formats, billed as France’s answer to Sonny Bill Williams and one of the world’s highest-paid players. He is also what the creation of the Drua is designed to stop.

“Most of the boys do it to survive, it works for them,” says Drua captain Nemani Nagusa. “The money is good and European clubs love the Fijian boys now because lots of them are doing well and playing the Fijian way. Now lots of agents and scouts are coming to Fiji to look for young talent. But the decision for young players is not a choice. If they get approached they go because the money is good and it pays way better than playing back at home.”

Nagusa knows this first hand. The back-rower took a long way around to Europe, playing for the Flying Fijians and Fiji sevens, getting a break in New Zealand’s third-tier National Provincial Championship, France’s second-division competition and, finally, a contract with Newcastle in the UK Premiership.

He brought his family home when COVID-19 hit and farmed vegetable crops, before Raiwalui came knocking. At 33, Nagusa will be on the mature end of the Super Rugby debutant spectrum, but when he leads the Drua out at CommBank Stadium on Friday night he will be fulfilling a childhood dream.

“If you’re in Fiji that’s the rugby you watch every weekend,” he says. “Fiji’s a proud rugby nation and Super Rugby is on top. At weekends, we meet at my uncle’s place and watch a game, the Crusaders or Blues, the Waratahs, the Reds. It’s tradition, we do that every weekend when the season’s on.

“The boys going to Europe, it’s not about them wanting to go. Most of the boys love Super Rugby and want to play there but there’s no chance because there’s no team for them. Now we have the Drua they’ll be looking forward to working hard to get into this team to play Super Rugby.”

It is fantasy to suggest the Drua will capture all the talent, or halt the player drain. Only a handful of Super Rugby players – Michael Hooper, Beauden Barrett and Taniela Tupou perhaps – are on the kind of money on offer in Europe. Radradra and Tuisova won’t be moving back to the islands any time soon.

Supply and demand dynamics tell us there will be a strong market for Fijian players for years to come in the rich European competitions, and in Australia too. Raiwalui has been bombarded with calls from rugby league agents angling for a look at the raw talent stationed on Australia’s east coast for the next few months. “I don’t think they understand what my role is,” he laughs. “But it’s part of the game. What teams are looking for is the best talent at the best price and they see Fijians as that.”

There is a mountain to climb. Think Wayne Bennett has it tough with the Dolphins and an 18-month lead-in to an NRL debut? Raiwalui, head coach Mick Byrne and the Drua’s interim chief executive Brian Thorburn have had six months. To recruit, to train, to sign sponsors and broadcast partners.

New Zealand’s ugly spat with Australia over the Bledisloe Cup last year meant a delay in the granting of the Drua’s Super Rugby licence. Raiwalui had eight European players lined up to come home but had to let them re-sign with their clubs and start over.

He’s assembled a mix of untested talent from the islands, a smattering of Olympic sevens gold medallists, journeymen such as Nagusa, a five-eighth from New Zealand and a couple of guys playing NPC and club rugby in Australia.

The Drua’s coaching and support staff are world-class. Athletic performance boss Naca Cawanibuka, physiotherapist William Koong and backs coach Brad Harris all worked together on Fiji’s triumphant 2021 Olympic sevens campaign. Cawanibuka is so revered for his work across both of the nation’s gold medal-winning campaigns that the entire squad, including Byrne, call him “Master”.

And well he might be, after receiving the squad in November and preparing them for their debut on Friday. Three-quarters of the group had not played any rugby since COVID-19 hit and the Fijian government shut down all community and representative sport. There were whispers of a highly rated young tighthead prop who arrived in camp tipping the scales at 160 kilograms. With border closures cancelling one of their two pre-season hit-outs, Byrne’s goal of a top-eight finish is ambitious, even from a 12-team competition.

Professional sport is rarely kind to the start-up team. The Rebels and the Western Force are still searching for a finals appearance more than a decade after their Super Rugby debuts. The Drua, named after the sacred double-hull boats the first Fijians used to populate the islands, are sailing into choppy open seas.

“If we took a talent per capita measure we’d be one of the richest rugby nations in the world,” Raiwalui says. “I had less than a month to put the team together. They’ve had three months to become professionals. It’s not going to be easy, but it’s about staying the course and making sure what we’ve installed will take us down that long-term path.”

If history favours the brave, the Drua will make their mark. They’ve been waiting long enough for all involved to know the right time is right now. Raiwalui, the Aussie kid whose path back to his roots started in an English winter. Nagusa, who woke early to steal his brothers’ boots for club games in Nadroga and thought he would farm vegetables for the rest of his life, until his boyhood dreams came true. No one wants to wait another minute.

“We’ve been waiting for 20 years. You don’t know what happens in another 12 months if you wait for the perfect time. Things could fall through,” Raiwalui says. “The opportunity was there and we are grateful for the opportunity. It’s been a long time coming. This programme feels like it’s the missing link in our pathway. One hundred per cent we had to take the opportunity.”